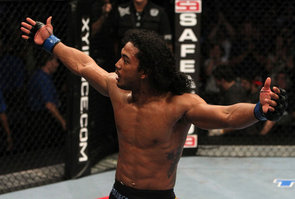 Henderson's manager Malki Kawa is pushing for a match with Clay Guida. And you know what? It makes perfect sense.

"He's the number one contender in my opinion and there's no way anyone is gonna tell me different. This guy is the number one contender, hands down. ... For me to think he has to beat Clay and Melvin to get to a title well, he just beat a guy who was on a seven fight win streak, who beat everyone they put in front of him, and who Dana White came out and said 'if you win this fight you get a title shot.' I think right now it's the other way around. I think Clay and Melvin have to beat [Henderson] to get a title shot, not the other way around. Because of scheduling, Guida is the next fight on our radar ... If [Ben is] not going to fight for the title in his next fight, then I'm gonna ask the UFC to give us 'the' guy to beat."

Right now the division is caught in a morass of MMA Math. Henderson has the impressive win over Jim Miller, but Guida beat Anthony Pettis. The same Pettis who cage kicked Henderson into the history books. It's a big enough mess that a fight between Henderson and Guida is the only thing that can sort it out.