Share All sharing options for: The Forgotten Man: Jared Hamman 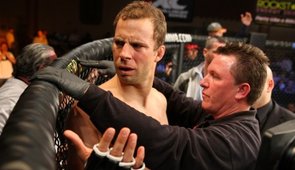 Before the main card gave us gems like Ben Henderson-Jim Miller and Chris Lytle-Dan Hardy, many were making noise about Jared Hamman's phenomenal win over an improving C.B. Dollaway. The two looked on their way to a Fight of the Night bonus; now, in the aftermath of great performances by Henderson and Lytle. Hamman has been all but forgotten. It's a shame, because their undercard tilt was one of the best fights of the summer.

Dollaway was all over Hamman on the ground and seemingly had the fight won with an arm triangle in the first round. But Hamman knew the perfect technique to counter the hold, "answering the phone." He brought his hand up to his ear, like he was indeed answering a telephone, a defense expertly called by UFC announcer Joe Rogan. Hamman survived to pound C.B. out in the second round.

Perhaps because of his perpetual snarl, perhaps because of an anti-wrestling backlash, perhaps by the will of the gods, Dollaway has a vocal parade of haters. Their leading voice, Bloody Elbow's Kid Nate, was pretty pleased to see the Arizona State wrestler go down in a heap of blood and concussive blows:

What's not to like? Dollaway is actually someone I've become a fan of because of the way he's incorporated submissions into his already excellent wrestling game. But all that went to the wayside when I realized Dollaway shot his wad trying to beat Jared Hamman with an arm triangle. From there it was just a hugely satisfying ugly beating of an exhausted Dollaway. Sorry C.B. but I enjoyed every minute of it.

Hamman was making his middleweight debut in the bout. I'm looking forward to seeing where he goes from here. He's definitely a prospect worth watching in a sparse 185 pound landscape.