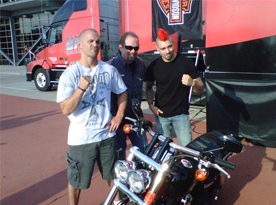 The UFC and Harley Davidson announced Monday that the two sides have agreed to a multi-year sponsorship renewal. Terms of the deal were not disclosed.

To commemorate the renewal, Harley Davidson ensured that longtime UFC veteran Chris Lytle finished his tenure on the highest of notes. The motorcycle manufacturer awarded "Lights Out" a brand new 2012 Harley-Davidson HD Blackline following the conclusion his career-capping victory over Dan Hardy at UFC on Versus 5.

The award was well deserved, but the pair's next co-promotion is the one that fans living in MMA-starved cities should be keeping an eye on. Harley Davidson and the UFC have teamed up for the "Hometown Throwdown," a contest to determine the next location for a full-fledged UFC event.

The winner will be selected through fan-voting, similar to the contest that brought Ben Henderson and WEC 53 to Phoenix, Arizona, with what turned out to be one of last year's most exciting events.

According to UFC officials, the cities that make the cut as finalists will be announced early next year, with the winner being chosen in the spring. The winning city is expected to hold the event in the summer of 2012.

For fight fans unable to attend the constant flood of Vegas-based events or out-of-the-country promotions, this is a primetime chance to bring the sport directly into your town. The "Hometown Throwdown" contest is scheduled to begin soon, and fans can register to vote at this site, as well as the UFC's homepage.