Nick Diaz Training With Andre Ward May Be Missing The Point

Share All sharing options for: Nick Diaz Training With Andre Ward May Be Missing The Point 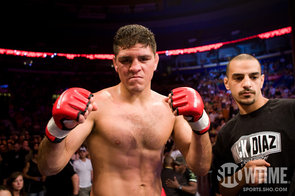 Nick Diaz, the former Strikeforce welterweight champion, marijuana enthusiast, and all around amazing man, is training with boxing superstar Andre Ward to prepare for his megafight with Georges St. Pierre. Diaz, who already uses volume punching to great effect, is hoping additional time with Ward, a former Olympic gold medalist, will take his game to the next level:

"Andre is very quick and athletic," Gracie said. "GSP is an athletic guy. I don't think he's the best boxer in the world, but he's fast and quick out there. To get used to a guy like Andre Ward, GSP wont be really that big of a threat speed-wise if Nick gets used to Andre."

Of course, back in the real world, unless Ward is teaching takedown defense, it isn't likely to change the outcome of this fight one way or another. GSP has the ultimate trump card - if Diaz gets him in trouble, he can take the fight to the mat at will. That, and not technical boxing technique, will be the difference in the fight.