Share All sharing options for: WEC Represent: Cerrone, Henderson Prove They Belong In The Big League 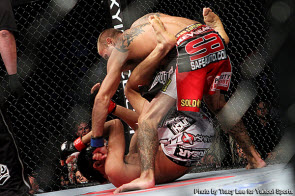 Going into UFC on Versus 5, the 155 pound fighters who had made the transition from the WEC to the UFC were a humble 6-7 in the Octagon. Last night Donald Cerrone and Ben Henderson made an emphatic case that the very best fighters of the WEC are as good as anyone in the UFC.

Cerrone made short work of Charles Oliveira, a highly touted Brazilian 21 year old, hurting him with a left hook to the body and finishing him off on the ground. Previously Oliveira's only UFC loss had been to top contender Jim Miller. Oliveira may want to consider moving down to the 145lb division where he won't give up so much power to his opponents.

Speaking of Jim Miller, the man who'd only lost to UFC champ Frankie Edgar and #1 contender Gray Maynard, now has another loss to Ben Henderson. Henderson made Miller look like the minor leaguer as he patiently waited out Miller's many submission attempts and punished him for the effort.

Henderson and Cerrone were long atop the WEC's 155lb class. They've now proven they are among the divisions' very best, regardless of provenance.

Now we'll have to see how the man who came in atop the WEC pyramid, Anthony Pettis, does in his second UFC bout since losing his debut to Clay Guida.