Jens Pulver Wins As Opponent Plays Right Into His Hands

Share All sharing options for: Jens Pulver Wins As Opponent Plays Right Into His Hands 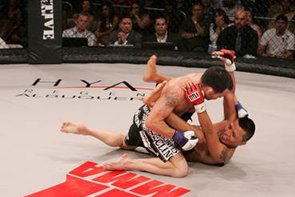 Jens Pulver, made the most of his bantamweight debut, getting back on the right side of the win/loss column by dispatching local favorite Coty Wheeler at MMA Fight Pit last night in Albuquerque, New Mexico. The former world champion has struggled in recent years, losing six in a row at one point before rallying to a 3-1 record in 2011.

Of course, to manufacture those wins, Pulver's team has matched him with increasingly embarrassing opponents.  Mike Lindquist is 8-23. Wade Choate managed an even record of 13-13. Wheeler, at least, is a legitimate fighter, a WEC veteran and a submission specialist with ten wins on the mat.

But something about this fight didn't quite smell right. Wheeler, who has his first child on the way, was pretty much out of the fight game when Fight Pit promoters brought him in for this important bout. Now that it's all said and done, he's going back to Barber College. Maybe that explains his willingness to play right into Pulver's hands?

Pulver's last five losses were all by submission. It was the obvious way for Wheeler to win. Yet, he never made a single attempt to ground Jens and finish him off, although he once grabbed Pulver's leg when he had been rocked by punches and was just looking to hold on.

Instead, he threw a goofy collection of switch kicks, spinning backfists, and looping punches. Even after nearly getting stopped in the first round, Wheeler started the second with the same broken strategy. He eventually got caught with a left hand, and the referee, refusing to stop the fight, allowed him to literally run away from Pulver before he eventually succumbed to additional punches.

"I'm an entertainer first and a fighter second," Wheeler said post fight. It doesn't take Sigmund Freud to read between the lines there. "I do it for the fans and I do it for the people who care and have love for me."

Pulver, of course, was ecstatic. But I didn't see anything to make me change my opinion. After his last fight I wrote what was called a "scathing" column for Bloody Elbow, was challenged to a public debate with Pulver by his management, then after accepting saw the offer pulled from the table. I thought it was sad to see Pulver, one of my favorites, reduced from his championship prime to fighting for sheckles on smaller shows:

Cheering Pulver's win, encouraging him to continue, helping him perpetrate this fraud: it's not doing him any good. The man is 36 years old. It's time to move on and find a new way to get through life. Delaying the inevitable, scrambling his brain a little more before moving back into the real world - that's not the answer. Let's celebrate Jens Pulver for all the memories he's given us in the cage and the ring. But let's make it clear it isn't where he belongs anymore. If you posted praise, congratulated him on Twitter, if you watched on YouTube, you were a part of his continued sad demise. Let's not do it anymore. It's time for us to move on - and it's time for Jens Pulver as well.