Ronda Rousey Needs A Little John Kreese In Her Life

Share All sharing options for: Ronda Rousey Needs A Little John Kreese In Her Life 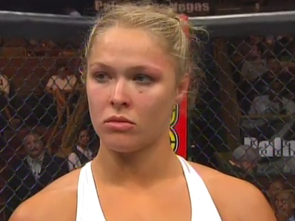 Ronda Rousey, an Olympic judo bronze medalist and undefeated mixed martial arts prospect, wants to be the face of women's MMA. She's got all the tools to do it - the mat pedigree, the developing standup game, and let's face it - the good looks that are also a job requirement in a post-Gina Carano world.

But Rousey came up short last night in her Showtime debut. Sure, she tapped out opponent Sarah D'Alelio in less than thirty seconds. Unfortunately, the win happened in a way that diminished Rousey rather than build her up. 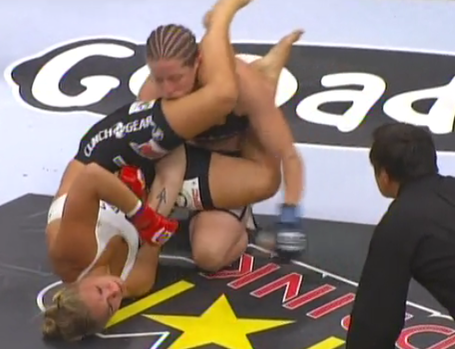 After a beautiful takedown and quick transition to an armbar, Rousey almost immediately let go of her lock, asking referee Steve Mazzagatti to stop the fight.

"When I originally went for the submission, I actually felt her elbow go out," Rousey said postfight. "And she said 'tap, tap' and I let go a little bit. I cranked on it again and turned to the referee and said 'She said tap.'...I was just trying to be respectful to her."

It was a good lesson for Rousey, one she could have learned from John Kreese, the lunatic proprietor of the Cobra Kai dojo in the Karate Kid film franchise. Despite being an unhinged Vietnam veteran and puncher of car windows, Kreese had some important advice for any aspiring martial artist.

"We do not train to be merciful here. Mercy is for the weak. Here, in the streets, in competition. A man confronts you, he is the enemy. An enemy deserves no mercy."

It's a lesson Rousey can use the next time she fights. You crank on a hold until the referee stops it. Period. When it's time to sweep the leg, damn it you've got to sweep the leg. This isn't a knitting class. It's a cage fight. You don't have to carry John Kreese with you all the time - but in the cage, his are the rules that will be the difference between survival and victory.