Strikeforce's Pat Healy: It Doesn't Even Feel Like The Same Company 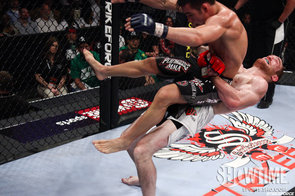 Fans spend a lot of time on MMA message boards debating what is good for the fighters. Do they need a union? Is the WEC merger working out for smaller fighters? Does the UFC's purchase of Strikeforce help or hurt the athletes?

Strikeforce fighter Pat Healy thinks he can answer that last one definitively. In an interview with Heavy.com, Healy made it crystal clear what he thinks of the new regime:

"Oh man, I feel weird even calling it Strikeforce anymore. It’s completely different. You could never get a clear answer from anybody. Who was the matchmaker? Who had power? Who was calling the shots? You never knew who to talk to. It was so disorganized. You wouldn’t fight for six months, and then they would tell you three weeks out that you had a fight. I have contacts for everybody now. They gave me a sheet where I can look up anybody I want to talk to. We’ve had constant contact with Sean Shelby. He let me know at the fighter summit that I would either be fighting July 30 or August 12. He kept us updated from there on out. It doesn’t even feel like the same company."

Healy, who fights Eric Wisely tonight on Showtime, told Bloody Elbow Radio he's been trying to get on his new bosses' radar:

"It's tough," he said. "Especially when you see guys who I've beaten like Dan Hardy. He gets a mohawk and talks a lot and next thing you see him fighting for the UFC belt. It's a shame this game is largely based on what you do and what you say outside the cage as much as it is inside the cage. I've always felt like I've always laid it on the line, always stepped up for every organization I've fought for. They needed something on short notice, I was always there to step up. I never complained about who I was fighting or how long of notice I had, but I just can't seem to get anybody behind me. I'm going to try to be a little bit more bold and say things that are on my mind and not be as reserved as I have been in the past."