From Russia, No Love: Are Russian Fighters Getting The Opportunities They Deserve?

Share All sharing options for: From Russia, No Love: Are Russian Fighters Getting The Opportunities They Deserve? 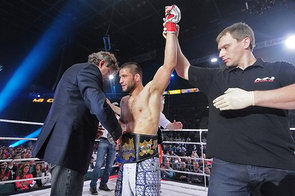 There are some outstanding fighters coming out of the hodge podge of Russian republics that came to life after the collapse of the Soviet Union. We've profiled some of them here at SB Nation, including the exciting welterweight Shamil Zavurov (pictured) and heavyweight sensation Guram Gugenishvili, a man Bloody Elbow's Leland Rolling called the best heavyweight prospect in the world.

Exciting and relevant fighters emerging from Eastern Europe is nothing new. Oleg Taktorov set the standard back in the earliest days of the UFC, and he was followed by a string of successful fighters, including legendary pioneers like Igor Vovchancyn and, of course, the great Fedor Emelianenko. Russian stars were a major part of every big time MMA promotion, from the UFC to RINGS, from Extreme Fighting to PRIDE.

Today, things have changed, and a Bloody Elbow reader wants to know: what happened to the MMA Russian connection?

It may be hard to believe, but there doesn't seem to have been a fighter signed from Russia since Ansar Chalangov's brief UFC stint in 2005-2006, when he fought Thiago Alves and Josh Koscheck, losing to both.

There is one exception, since Dennis Siver was born and grew up in Russia, but his career began in Germany and he's never competed in Russia or represented any Russian club...

How come UFC is so cold to Russia? In previous years, one could argue that the talent wasn't there for them to sign perhaps, but it's not the case now. With M-1 and some other Russian promotions now on state television, the ranks are booming with potential major league prospects.

Are Russian fighters getting the shaft from UFC matchmakers? Or is the contract haggling with management teams from Eastern Europe making it hard for the fighters to get opportunities? Will we eventually see top prospects like Zavurov tested against the very best?

The answer to each and every one of those questions is a certified "maybe."

History has indicated that there is a place among the best of the best for Russian fighters. It will be interesting to see who emerges as this generation's Vovchancyn or Fedor. For the time being, you can find these rising stars on M-1 Global broadcasts, both on Showtime and internet streams. Make sure you pour a shot of Vodka, pull up a chair, and yell Здравствуйте as you get to know the next wave of Russian stars.