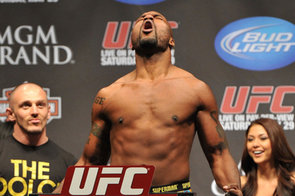 Fans just assume most fighters are giving it their all. We've seen fighters train on The Ultimate Fighter and have a basic understanding of the work it takes to compete at the highest level. We assume that Randy Couture will have done every thing humanly possible to prepare himself for the cage. The same can be said of Georges St. Pierre, Sarah Kaufman, and dozens of fighters up and down the card on typical UFC broadcasts.

It says something when Quinton Jackson doesn't automatically get that benefit of the doubt.

Jackson, who has admitted in the past not to training hard for certain fights, assured his fans today via online video that he was going to give Jon Jones a heck of a fight at UFC 135:

A Message to my FANS only. (via RampageJackson4Real)