Share All sharing options for: How To Beat Bellator Champ Hector Lombard 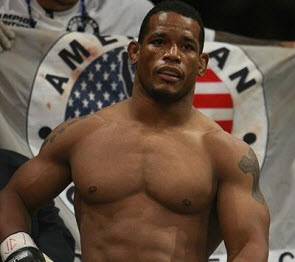 "(Lombard and I) were hand fighting for probably three minutes, and he karate chops me," he adds. "I go, ‘OK, I must be irritating him somehow.' Thirty seconds later, he pushes me back and punches me in the face [with] no glove on; gave me a bloody nose and some stars. I was a little irritated, although more disappointed than anything. I kind of rolled my eyes and started walking away, and he tried to fight me right there. He lost it, lost a nerve, and somebody came in and stopped it.

"He told me that I kept on pushing him in the face," he says. "I was working his head and trying to get an underhook to try to set up for a shot, so he punched me in the face.

"He's got no endurance," Volkmann says. "He's got like three minutes of endurance. The secret to beating him is get close [and use] dirty boxing. He'll get so tired after three minutes, you'll win."

Lombard seems to make friends every time he laces up the gloves. He feuded with heavyweight Josh Barnett after they trained together last year too.