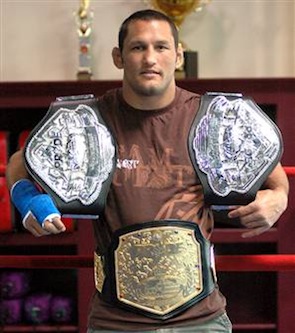 If at first you don't succeed, try again.

Back in 2007, Dan Henderson, who at the time was the dual Pride FC middleweight (205 pounds) and welterweight (183 pounds) champion, attempted to add the Ultimate Fighting Championship (UFC) light heavyweight crown to his prolific professional resume.

He was booked to battle Quinton Jackson at the appropriately-named UFC 75: "Champion vs. Champion" to unite the two titles after Zuffa purchased the Japan-based promotion earlier that same year. He didn't, dropping a hard-fought unanimous decision to "Rampage."

Now, fresh off one of the most thrilling, career-defining moments in his legendary mixed martial arts (MMA) career -- a technical knockout finish of Fedor Emelianenko this past weekend -- the Strikeforce light heavyweight champion tells The Telegraph that he's interested in giving it another shot:

"I think [a unification fight] could be interesting going forward.... I'm the Strikeforce light-heavyweight champion, I've beaten Fedor, and I'm unemployed, so we'll have to see what the talks are now after I've had a few weeks off. It's not a bad position to be in though."

UFC Light Heavyweight Champion Jon Jones is set to defend his title against the aforementioned Jackson in Denver, Colo., at UFC 135 on Sept. 24, 2011. Rashad Evans, who competes this upcoming weekend in the UFC 133 main event opposite Tito Ortiz, has already been anointed the next number one division contender.

Henderson, 41, arguably the "Best American MMA Fighter Ever," has now officially thrown his name into the hat just in case. And he deserves serious consideration, even though he never defended the Strikeforce 205-pound title after defeating Rafael Cavalcante to win it earlier this year.

He shouldn't have to.