Is Dan Henderson The Best American MMA Fighter Ever?

Share All sharing options for: Is Dan Henderson The Best American MMA Fighter Ever? 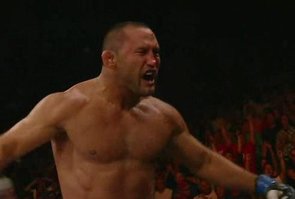 Dan Henderson's big win over Fedor Emelianenko Saturday has created quite a discussion on Twitter. Not just about the fight, but about Henderson's historical place among MMA greats.

Some, like Heavy MMA's Matt Brown, are calling Hendo the best American MMA fighter of all time. Is that a title that fits the former Pride star? Former Sherdog fire starter Tomas Rios disagrees, pointing to Henderson's lack of a dominant run.

We know Henderson's credentials. He's had significant wins in three weight classes and has held middleweight and light heavyweight gold. But he's never been considered the best fighter in his weight class or in the world at any given time, and his big wins over Fedor and Wanderlei Silva seem to have come when both men were past their primes.

In my mind, there are five fighters, who like Henderson, have legitimate claims to the top spot:

Chuck Liddell: The power punching wrestler was the UFC champion as the sport made it big post-The Ultimate Fighter. Won seven in a row, including taking two a piece from fellow contenders Tito Ortiz and Randy Couture.

Frank Shamrock: Went 12 fights with no losses and one draw, but his prime came when few fans were watching and many of the best were in other organizations.

Tito Ortiz: The UFC's poster boy when Zuffa first bought the company in 2001, Ortiz was a dominant Light Heavyweight champion. But against fighters on this list, he was a combined 0-4.

Matt Hughes: The kingpin of the UFC's welterweight division for years. Hughes won the title twice and defended it successfully seven times.

Who do you have as the best American fighter ever? Sound off in the forums.