Herb Dean's Other Controversial Call At Strikeforce: Fedor Vs. Henderson

Share All sharing options for: Herb Dean's Other Controversial Call At Strikeforce: Fedor Vs. Henderson 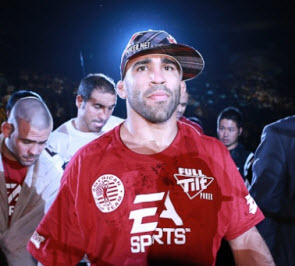 At Saturday's Strikeforce: Fedor vs. Henderson, it wasn't just the headlining fight that saw Referee Herb Dean in the midst of controversy. In the unaired preliminaries Gesias "JZ" Cavalcante met Bobby Green. Officially the fight will go in the books as a narrow split decision win for JZ. Those who actually got to see the fight saw something different. They saw JZ put Green in a rear naked choke and force the tap just at the bell that ended the second round.

Referee Herb Dean thought the bell came before the tap. Others sitting cage side saw it differently.

Round 2: JZ opens with a nice kick before Green gets the fight to the clinch against the cage. Green drags JZ to the ground, but he pops back up. JZ goes for a jumping knee, but doesn't land, Green instead pushes the fight back to the fence. JZ is able to get underhooks and get the takedown. JZ looking for ground and pound from inside Green's guard. JZ moves to full mount, Green rolls and JZ looks for the choke. Green appears to tap as the round comes to a close but the referee doesn't see it and the round ends. Replay shows he clearly tapped.
MMAWeekly scores R2 10-8 JZ Cavalcante

Here's what Sherdog had to say:

The two lightweights traded barbs standing, jockeyed for position in the clinch and largely fought to a stalemate for much of their 15-minute encounter. Rounds one and three could have gone either way, but the second period was not in dispute. There, they exchanged takedowns, but Cavalcante (16-4-1, 2 NC, 1-1, 1 NC SF) made the most of his, as he transitioned to full mount late in the round and forced Green to his knees with punches. The choke came next, followed by the tapout, but Green (15-5, 0-1 SF) was saved by the bell.

Cavalcante throws left hands and passes to his right over Green's halfguard.Cavalcante takes full mount with 24 seconds left. Green gives u p his back and Cavalcante works for the choke. It looks from watching the big screen that Green tapped but the bell sounds. Dean didn't catch it from his vantage point. 10-9 Cavalcante.