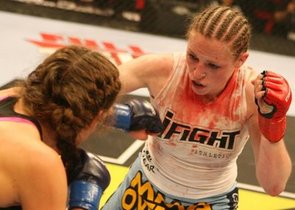 Miesha Tate achieved a dream last night, winning the Strikeforce bantamweight title from Marloes Coenen, using her wrestling and dogged persistence to outlast and tap out the champion. There won't be long, however, to sit back and celebrate. Tate has a tough first defense waiting in the wings, a rematch with former champion Sarah Kaufman.

It will be interesting to see what, if anything, has changed since 2009 when the two women met in a Strikeforce Challengers showdown. That fight was initially supposed to feature Tate against Kim Couture. Luckily, we got Kaufman in her stead - and a great matchup.

It was an even back and forth fight. Tate controlled Kaufman in the second round with her wrestling and top control, but in the first and third rounds, Kaufman was able to impose her will. It's easy to see how fans could look at the previous fight and extrapolate a similar outcome. But there is certainly one significant difference. In their first fight, the women were fighting under draconian rules limiting rounds to three minutes a piece.

With a full five minutes, Tate will have more opportunities to get Kaufman to the ground. It changes the equation in a major way. Sarah will have to be on her "A Game" for a full 25 minutes instead of just nine minutes. That's one of the reasons I like Tate in a rematch - one I can't wait to see.