Share All sharing options for: Dan Henderson And "The Natural Middleweight" Meme 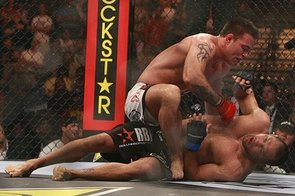 Dan Henderson is one of the best fighters in MMA history - as a light heavyweight. That's where his historical legacy lies, and that is where he's found the most success in his career. Unfortunately, some off hand comments by UFC President Dana White have left some fans confused, causing a series of articles and message board posts about "Dan Henderson: Middleweight."

Henderson has always looked sluggish at 185 pounds. It didn't stop him from winning a gift decision over Murilo Bustamante in Pride, but he did subsequently struggle against a journeyman name Kazuo Mizaki and looked abysmal against Jake Shields in Strikeforce. Henderson is just not that good as a middleweight. The middleweight version of Dan Henderson doesn't have a hope or prayer against Fedor Emelianenko.

As you write about this fight, for the sake of accuracy, don't buy into the hype. Fedor Emelianenko wasn't knocked out by a "natural" middleweight. He was knocked out by one of the greatest light heavyweights of all time.