Igor 'Ice Cold' Vovchanchyn, The King Of The 8 Man Tournament

Share All sharing options for: Igor 'Ice Cold' Vovchanchyn, The King Of The 8 Man Tournament 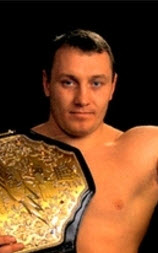 We're wrapping up our series on post-Soviet fighters before Fedor Emelianenko today with a look at Igor Vovchanchyn, the Ukranian kickboxer who won more 8 man No Holds Barred tournaments in the 1990s than anyone else.

Igor's an outlier from the other 4 legends of the 1990's (Oleg Taktarov, Igor Zinoviev, Volk Han and Mikhail Ilioukhine) in many ways. He's the only non-Russian for one thing, the only one of the group who was not at least 50% grappler, and he went on to have the most successful post-2000 career of them all.

Vovchanchyn's historical significance to MMA is he, along with Marco Ruas, Maurice Smith and Jose "Pele" Landi-Jons, proved that strikers could sometimes beat grapplers in no-rules bouts. That was big stuff we take for granted today, but at the time it was a revolution in nascent sport ruled by Brazilian Jiu-Jitsu, Japanese shoot fighters, Russian Sambo practicioners and wrestlers.

Fedor Emelianenko fans who go back and watch Igor's seemingly endless series of overhand right knock outs will recognize the exact same punching technique Fedor built his career on. Like Igor, Fedor's career has been dogged with hand injuries. Ultimately a shattered right hand forced Igor to retire in 2005 at the age of 30 with an incredible 54-10-1, 1 NC record (per Wikipedia).

Ironically Vovchanchyn's success in the Pride era means he's exponentially better known to this generation of MMA fans than any of the other four. That's not how it was in the 1990's.

Unlike Taktarov and Zinoviev, who starred in several major pay-per-view events in the U.S. or Han and Ilioukhine, who were stars of Japan's Rings organization, Vovchanchyn was primarily a legend on the underground VHS tape trading black market.

He was "the other Igor" because Igor Zinoviev was the one best known to American fans, who'd seen him on several American pay per views and commercially available videos. Igor Vovchanchyn was strictly for the hard-core fans who ordered grainy VHS tapes coming from Russia by way of Japan. We eagerly awaited our packages  in the mail and sat through hours of sloppy, brutal  NHB fights with no English language commentary just to see Igor knock clowns the eff out.

Igor first came to prominence in the second Absolute Fighting tournament (confusingly remembered to history as IAFC 1) in 1995. It was a 24 man field and Igor won six fights in one night. Two of those fights were wins over BJJ blackbelt Adilson Lima -- who protested his first loss so vociferously he got a do-over only for Igor to KTFO him again. Igor lost to eventual runner up Mikhail Ilioukhine in the semi-finals via chin to the eye.

It would be Vovchanchyn's last loss for five years. In that 1996-2000 span he won an incredible 35 fights and won at least 10 (record keeping is extremely poor for Russian NHB tournaments in the 1990's) four, eight and sixteen man tournament.  Scroll down for animated gifs of Igor clowning fools.

The original Igor was a 5'9" ~190lb fighter who was lithe, lean and incredibly strong. In order to cope with the giants he regularly met in no weight class tournaments he ballooned up to an excessive 200+lbs. Had he fought today he'd likely have fought at middle-or even welterweight.

Igor would go on to hand Mark Kerr - the most feared wrestler of early MMA -- his first loss in a bout that was later ruled a No Contest because for that one Pride event knees to the head of a grounded opponent were illegal. To "real NHB" fans like myself, we knew what we saw -- Igor beat the might Mark Kerr fair and square, rules were for chumps, this was No Holds Barred dang it.

He went on to lose to Kerr's peer Mark Coleman in the finals of Pride's incredible 2000 Grand Prix Open. From there he remained near the top of Pride's heavyweight division until 2002/2003 when he lost 3 of four fights to Heath Herring, Quinton "Rampage" Jackson, and Mirko "Cro Cop" Filipovic.

Here's some gifs of the kinds of work Igor did back in the day.

Here he's beating UFC 7 semi-finalist Paul "Polar Bear" Varelens, a 6'8", 300lb monster at IFC 1 in Kiev in March 1996. This was the final round of the tournament. Needless to say, Igor won.

Below he's creaming Oleg Tischenko at the Ukranian Octagon event in March 1996.

Below he's doing in Nikolai Yatsuk, also at the Mr Powerman tournament.