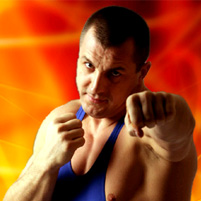 Of all the Russian MMA pioneers we're covering in this series, Ilioukhine is the least well-remembered. But when early MMA came to Russia in 1995, only about 18 months after the first UFC and about a year after first Vale Tudo Japan, Ilioukhine was by far the most successful fighter.

He won the first IAFC (Absolute Fighting Championship) tournament in July 1995, beating five opponents in one day. The event was a legend among old school MMA fans (then called No Holds Barred) who traded VHS tapes of fights. It featured 16 Russian fighters, had no English-language commentary, and featured the bizarre blend of completely brutal mismatches, fiascos, and incredible, gritty violent fights that were typical of MMA back in the day.

It says a great deal about Russia's tradition of combat sports that when NHB first emerged in Japan and the U.S., the Russians were able to mount a major tournament featuring none of the Brazilian imports that had dominated the scenes in both North American and the Far East. Nope Mikhail used his considerable Sambo grappling skills to sweep through the tournament. He won four of his five fights via achilles lock. The finals, against the gritty scrapper and Judo player Victor Yerohin, required him to use a rear naked choke.

In the second IAFC tournament (confusingly called IAFC 1 in the record books), Ilioukhine worked through a 24 man field with a wider variety of submission attacks. He won with an arm bar, a guillotine choke, his trademark achilles lock and the rarely seen chin to the eye. He pulled that last one off in the quarter finals against Igor Vovchanchyn, a young kickboxer who went on to become a legend in Pride Fighting Championships down the road. Unfortunately for the barely 200lb Ilioukhine (he'd probably have fought at middleweight or even welterweight today) he ran into the beastly 6'8" 270lb Brazilian Ricardo Morais in the finals.

Ilioukhine acquitted himself well against the monstrous Morais, a student of Renzo Gracie, getting the take down and spending much of the fight in Morais' guard. Unfortunately, Ilioukhine was anything but an effective striker, on the feet or on the ground and when he dropped back for a leg lock, Morais took top position and proceeded to blast Ilioukhine before finishing him with a rear naked choke.

Partly as a result of the notoriety of the IAFC tournaments, Ilioukhine got the opportunity to go to Japan and join Akira Maeda's Rings organization. He joined up with Volk Han's Russian Top Team and became a staple of that worked "shoot fighting" wrestling promotion for the next several years.

He was only a mid-tier performer in Rings' worked era, a protege of Volk Han who never got quite the respect his mentor got from Japanese fans. Similar to a certain Kazushi Sakuraba, Ilioukhine didn't thrive in a worked environment as well as he did in actual "shoots" (matches without a predetermined outcome).

In 1999 he was a participant in Ring's hugely ambitious first King of Kings 32 man tournament - the event that introduced Renato "Babalu" Sobral, Antonio Rodrigo Nogueira, and a certain Fedor Emelianenko to the world. He picked up two wins in the opening event, which earned him a berth in the final 8 man tournament. Unfortunately he ran into Babalu Sobral in the opening round and lost via arm bar.

Later that year he picked up a very controversial submission win over Randy Couture in a Rings event in 1999.  Video of that fight is below. After managing to hang with Couture in the clinch for almost eight minutes, getting the worst of Couture's dirty boxing, Ilioukhine attempted a kimura in the corner of the ring. When the fight was paused and restarted in the center of the ring, Ilioukhine finished the submission. Couture immediately complained that Iliouikhine locked on the hold too tight before they were tapped to restart the fight and has disputed the loss ever since.

In the 2000 King of Kings tournament, an equally ambitious undertaking that established Antonio Rodrigo Nogueira as the world's top heavyweight, Ilioukhine lost to Tsuyoshi Kosaka in the opening round. Kosaka was Ring's "great Japanese hope", the tough shoot wrestler who gave Fedor Emelianenko his first loss and nearly beat Bas Rutten to earn a UFC title shot in 1999.

Poor Ilioukhine was no match for Kosaka on the feet and just got the crap beat out of him, losing by KO. He lost to the fearsome Bobby Hoffman via burtal KO at Rings 10th Anniversary show in 2001 and was never really a factor in top level MMA again.

He fought for five more years, even making an appearance in Pride where he lost badly to Quinton "Rampage" Jackson in 2003.

All in all, Ilioukhine should be remembered as an incredibly gritty and brave fighter with dangerous submission skills but no striking whatsoever. He was a Russian champion and a contender in one of Japan's most storied promotions of the turn of the millennium.

Here's Mikhail in a prouder moment, beating Igor Vovchanchin in November 1995 in the incredible IAFC Absolute Fighting 1 (which was actually the second IAFC tournament). Ilioukhine used a submission technique that is, to my knowledge unique in modern MMA, the chin to the eye. I'm not even sure if this would be legal or not in today's unified rules environment. My guess is no. (That's an attempt at a joke kids, it's eye gouging and is patently against the rules).