Volk Han, The Man Who Brought Sambo And Fedor To Japan

Share All sharing options for: Volk Han, The Man Who Brought Sambo And Fedor To Japan 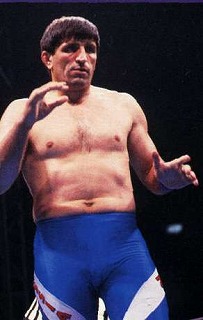 So far in our little look back at the fighters from the former Soviet Union who helped shape modern MMA, we've looked at guys who made their mark in the USA: Oleg Taktarov and Igor Zinoviev.

Now it's time to go east young man and take a look at what was happening in Japan even earlier in the 1990's. Japanese wrestlers had been obsessed with the old school "shoot" wrestling (ie actual sporting matches without predetermined endings) since the 1970s when Antonio Inoki pioneered the cross-sport match. They were all works, with the exception of his disastrous bout with Muhammad Ali, but it was still cool to see wrestlers against champions of other combat sports like boxing, karate, judo, etc.

Throughout the 1980s pro wrestling in Japan just kept getting "stiffer" -- ie the wrestlers did more and more real striking and grappling in the matches -- but were still "works" -- ie the outcome was decided in advance.

Things really took off in the late 1980s when a new generation of Japanese pro-wrestlers decided to see how far they could advance Inoki's "reality based" approach.

One of the ringleaders of this movement was a guy named Akira Maeda. A talented and popular pro-wrestler who founded his own promotion, called Rings, in at the end of the 1980s.

Rings was all worked fights, but done as stiffly as possible with an emphasis on submission grappling. As part of his obsession with realism, Maeda scoured the globe for combat sports athletes.  He brought in kickboxers and grapplers from Holland, then he went to Russia.

And that's where he found Magomedkhan Amanulayevich Gamzatkhanov or Volk Han as he's better known. Han came to Rings in 1991 and introduced Sambo, with its fearsome leg locks and emphasis on going for the quick submission to Japan.

Basically what Oleg Taktarov did in the USA, Han did in the Land of the Rising Sun. He personified the skilled, stoic and fearsome Russian fighter archetype we've come to know and love.

Despite what you might find on Wikipedia or the Sherdog Fight Finder, most of Han's bouts in Rings were works, but towards the end of the 1990s, Maeda adapted to market realities and began to incorporate real shoots into Rings cards.

In 1999 and 2000, Rings put on what were the best MMA tournaments ever mounted up to that time. The first Pride Open Grand Prix was a few months later. Han participated in the second of those tournaments. Despite being 40 years old and injured he acquitted himself well, winning two fights in the opening event to advance to the final 8 man tournament.

He lost to a young Antonio Rodrigo Nogueira in the opening bout of the final 8 man tournament but it was a very respectable showing for an aging pro wrestler taking part in MMA for the first time.

More importantly to history, Han brought a slew of other fighters with him from the former Soviet Union including Mikhail Ilioukhine and a certain Fedor Emelianenko. Han not only recruited the younger fighters, he also trained them at the Russian Top Team.

A lot has changed in the last ten years, for one thing it's not the same wide open booming global economy that had young Russian men traveling the world in pursuit of opportunity. Promoters like M-1 Global have tried to keep the pipeline to world MMA open to Russia's hordes of talented combat athletes, but we may never see the like of Fedor again.

Another key factor has to be the absence of a guru figure like Volk Han who can shape younger atheletes and spur them on to greater accomplishments than he himself achieved.

Here's Volk Han in action at Rings Millennium Combine 2 back in June of 2000 against Brandon Lee Hinkle, a training partner of Mark Coleman and a future UFC fighter.