Who? Eddie Alvarez Vs. Michael Chandler Set For Bellator 54

Share All sharing options for: Who? Eddie Alvarez Vs. Michael Chandler Set For Bellator 54 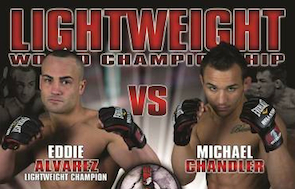 Bellator recently announced that its most coveted possession, Eddie Alvarez, will defend his 155-pound title for just the second time when he takes on Michael Chandler at the Boardwalk Hall Ballroom in Atlantic City, N.J., on Oct. 15, 2011.

Chandler is an undefeated up-and-comer, besting Marcin Held, Lloyd Woodard and Patricky Pitbull in the promotion's most recent lightweight tournament to earn the championship opportunity. The Xtreme Couture-trained fighter appears to have a nice mix of submission and ground skills, finishing 75 percent of his opponents throughout his career.

But does he have what it takes to knock off the fifth-ranked lightweight (according to the MMA Consensus Rankings) in the world?

Probably not. And neither did most of the other competition (sans Roger Huerta and Pat Curran) who Alvarez has faced since joining the promotion in 2009. He's the proverbial big fish in one of mixed martial arts' smallest ponds.

That suits the father of three just fine, or so he says, preferring to keep a steady paycheck, as well as his ancillary rights, to support his family. "Risking" it all with a jump to the Ultimate Fighting Championship (UFC) doesn't seem to be a practical decision.

It doesn't matter that nearly all of the better lightweight fighters are on Zuffa's payroll. The self-professed "control freak" prefers to pick and choose where he goes and what he does.

He likes the freedom to select his sponsors. He likes the power to exclude himself from a video game if he doesn't want to be featured in it. He likes to assure his children that their father will have a job tomorrow, win or lose.

Is that so bad?