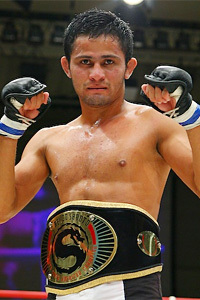 Jussier "Formiga" da Silva Vieira. If you are a hardcore fan of Mixed Martial Arts you probably heard about him. If you only care about the UFC or bigger weight divisions this very talented fighter has escaped your eyes. He fights for Tachi Palace Fights on August 5th versus veteran and Flyweight legend Mamoru Yamaguchi. But the road until then won't have been an easy one.

For almost two years Jussier was the king of the Flyweight division, an accomplish he achieved by beating former Shooto World Champion Shinichi "BJ" Kojima by decision in a non title affair on July 19th, 2009, and fell in some rankings to #4 or #2 after his decision loss to former WEC fighter Ian McCall on his second United States fight February of this year.

In this great article by Tomas Rios on Sherdog.com Jussier exposed how life was to him and shared the biggest tragedy of his life so far, the loss of his father killed by a drunken driver that 2 and a half years later has yet to be prosecuted for his crime.

He also shared how being the number one ranked fighter had made little changes in his life. Although he was number 1, he still lived as an unknown, and that stands even after his two US fights.

November 30, 2010. Two days away from his US debut at Tachi Palace Fights 7 - Deck the Hall versus a tough Danny Martinez (a guy who fought as big as 145 pounds, took everything Mark Hominick throwed at him but finished the fight, and also went to a decision versus Joseph Benavidez on their WEC debuts), and Jussier was walking on the Hotel with a expression of preocupation on his face. It was weird because so far he was very calm. Who knows, pressure might have gotten to him after more than a week in US. So I decided to ask what was going on.

To my surprise, the fight was the last thing going on his mind by then. Jussier surprised me with the news that that day his job's contract would end, and it wouldn't be renewed. He was making U$ 250 per month, and with this he had to pay the bills and support his son (he's a single parent), mother and sister.

I sit down with him in one of the tables near the Casino and we started doing math. His first fight purse was great compared to what he used to receive, and how it was paid was even better - we have to thank Jeremy Luchau (Tachi Palace's event coordinator, and the one responsible for Tachi Palace Fights) for that. He would get all of the money from the fight guaranteed, instead of the usual "show money plus win bonus", but he would only get 25% of that, because 75% went to his VISA costs.

After calculating everything I showed him the money would be more than enough for his next fight, which would be in February win or lose, and the February money would be enough for a few months, more than that if he got a win, and he had no reason to be thinking on anything but the task he had ahead of him. Things worked out well, he relaxed, and got his focus back into the fight.

Things weren't going as good as he thought it would be regarding money - the idea was to get enough sponsorships to cover the VISA cost. Unfortunelly, for that fight he only got a last minute sponsorship thanks to Sherdog.com's owner Jeff Sherwood, who talked with his friends at Clinch Gear and got some money plus gear. The short wasn't left blank, though, as Jussier fought with shorts having the names from people all around the world, most from the US and Canada, who had donated money to him in order for him to buy the plane ticket to fight at Shooto Brazil 16 and defend his Shooto South American title.

Also - and this deserves a paragraph of it's own - he got the support from Alan Henderson, from http://alanhendersonfund.org/ . We consider Alan his number 1 foreigner fan, and we're pretty sure he is.

Until all this happened over twety MMA related sponsors had been contacted/tried to contact, five said they couldn't offer anything, the others didn't even care to return or answer. One looked like would make a deal - a pretty good one - and then when the confirmation message was to arrive there came the "sorry, but we looked at our budget and we can't do it this time" followed by "What can you offer?" and "Nothing".

Fight night came, Jussier won, and then the focus was on the February fight versus Ian McCall. All the process restarted, and the same answers were given. But then some things appeared. And thanks to Alan and Sean from Intrepid Sports Group, others also showed up. We got him around 2000 dollars in sponsorship for that fight, which was great because Jussier lost and also had 30% deducted from his purse due to the IRS, but still wasn't the expected. Of course, there were some troubles. Looked like some money wouldn't be given, but in the end Jussier received it all.

In May came the announcement of the Mamoru Yamaguchi fight, but the search for sponsors was going the same way as before. The confirmation of the fight made nothing to change people's interest. Thirty, forty, lots of MMA related and non-related companies were searched, but nothing was happening. And this was the time Jussier needed it more.

As someone who lived with only U$ 250 per month, Jussier had debts, he had bills to pay that if it weren't for his two Tachi fights he has no idea how he would pay them. He also had to change some things on his training, added some other people, got a personal trainner, everything he could do in order to improve technically and physically after feeling weaker and smaller than both his opponents in the US. It had some extra costs, and come the August fight, he will have spent everything he earned in his last fights. It wasn't a choice, it was necessity.

All this effort should be compensated, and good news started to arrive. Sponsors interested, good money related. Things were going great, but looks like nothing can come easy for him. News of the future sponsors not paying some fighters arrived, and answers weren't coming anymore, so it was back to the beginning, having to search for everything again. Today, eight days to the fight, no one agreement has been made.

Things may change in the future, specially with a win over Mamoru Yamaguchi and a Tachi Palace Fights title shot, but he also thought things would change when he signed to fight in the US. To be a top fighter in the Mixed Martial Arts world it requires dedication and support. He has the dedication, the desire, but the support is missing.

To keep fighting at an elite level, there will come the time he will have to visit other countries, train in the United States, Holland, wherever he has to go to become better. He had the chance a few months ago. Money insecurity and several other reasons got in the way, but he would like to be able to take that chance when it presents again.

A fighter who was for almost two years the #1 fighter in his weightclass, and is the #2 or #4 in the world today, shouldn't have to choose between this or that supplement, this or that equipament, because he can't afford it all. Specially, shouldn't be having to tell his son he can't buy this or that toy.

Your perspective on this article/fan post may change after you know I'm Jussier's representative (if you hadn't figured that out already), and more important - his friend. It shouldn't. Reach me on the comments and also on twitter at @MatheusDCAquino.

Also, please forgive any English mistakes and the limited vocabulary, English is not my first language and I still have a lot to learn.