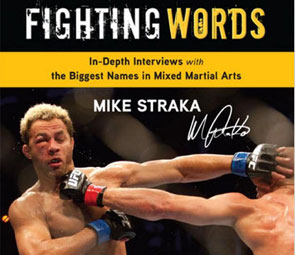 Mike Straka impresses me. People who know me well are probably mouth agape, jaws dropped to the floor - because that's a compliment I don't levy all too often. But there's something about Mike that warrants that respect, a quiet confidence and unflappable professionalism.

That respect didn't stop me from being skeptical when he announced his studio interview show on HDNet, Fighting Words with Mike Straka. Sure, his pioneering internet show Fox Fight Game had been excellent. But a studio show was a different beast, something a little more sophisticated than tracking down fighters after an event and shooting interviews with one camera man operating off the shoulder.

But Mike Straka was up to the challenge. His show quickly became the industry standard, featuring insightful and entertaining interviews with the sport's top stars. Straka straddled the line between entertainer and journalist brilliantly, asking all the right questions, but in a way that never made his guests uncomfortable.

Those interviews are captured perfectly in his new book Fighting Words: In-Depth Interviews with the Biggest Names in Mixed Martial Arts. Straka talks to 15 top names, everyone from old school legends like Ken Shamrock and Bas Rutten to UFC President Dana White. With each, he puts the interview into context, explaining when it happened, and what was going on in the sport at the time.

Straka finds a way to get each fighter to open up, giving you a good feel for the man and not just the athlete. It's a great collection of interviews and really covers the sport from top to bottom. It's the fighters' stories in their own words - and a great addition to any MMA library.