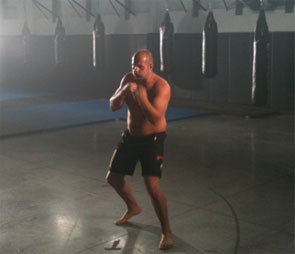 Strikeforce recently held an open media workout for the field of fighters who are set to compete this weekend (Sat., July 30, 2011) at the Sears Centre in Hoffman Estates, Illinois. Fedor Emelianenko, pictured above, will headline the event, which is scheduled to air on Showtime at 9 p.m. ET on fight night, opposite fellow mixed martial arts (MMA) legend Dan Henderson. The open workout, held at the Central Chicago Marriott Northwest hotel, was an opportunity for members of the media to speak with the featured fighters and take photos/videos of them as they make their final preparations for their bouts. In addition to Emelianenko and Henderson, Miesha Tate, Marloes Coenen, Paul Daley, Tyron Woodley, Robbie Lawler, Tim Kennedy. Scott Smith and Tarec Saffiedine were all on hand to strut their stuff. For more pictures of the Strikeforce: "Fedor vs. Henderson" open media workout out head over to M-1Global.com.