Share All sharing options for: Igor Zinoviev, The Houdini Who Broke BJJ's Spell 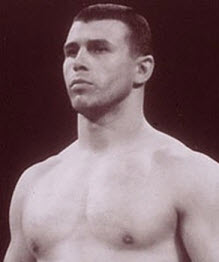 The second notable Russian fighter to come to the attention of American cage fighting fans (it wasn't called MMA yet) was Igor Zinoviev.

A Russian special forces veteran who combined Judo, Sambo and kickboxing with the stoic Russian style fans of Fedor know so well, Zinoviev was the first fighter to beat a BJJ black belt on a major American pay-per-view event.

Sadly, if he's remembered today at all, it's for his career ending loss to Frank Shamrock at UFC 16.

When Igor Zinoviev faced Brazilian Jiu Jitsu champion Mario Sperry at the finals of the first Extreme Fighting Championships in November 1995, he was expected to lose.

As formidable as Zinoviev had looked in his 40 second win in the opening round of the 4-man tournament, fans of caged mayhem had already learned that you never bet against the Brazilian Jiu Jitsu fighter.

And Mario Sperry wasn't just any Brazilian Jiu Jitsu fighter. He was being touted as "the Zen Machine", an implacable, invincible killer with a ridiculous 99-0 record (they must've been counting slap fights he had with his brothers or something).

But lookout, almost 12 minutes into their bout and Zinoviev, despite having spent a considerable amount of time in "the dreaded mount position" was looking anything but beat. And the "Zen Machine" was looking more and more flustered. Suddenly Igor got back to his feet and Sperry tried to leap up on his back (see animated gif below), not very smart so far into a very hot and sweaty fight. Sperry slipped off and Zinoviev wasted no time kneeing him in the face (legal at the time). The cut that opened up on Sperry's head forced the fight to be stopped.

Here are two looks at the final moments of the fight. The stoppage seemed very weird to me at the time and was never adequately explained by the announcers, but there was no doubt in anyone's mind that Sperry had been beaten.

Just like that Brazilian Jiu Jitsu had been beaten and on American pay-per-view no less. There's a first time for everything and Igor Zinoviev was the "Houdini" who escaped from all of Sperry's submission attempts and hung on to beat not just Mario Sperry but the very myth of BJJ invincibility.

He did it by being one of the first fighters to combine a well-rounded martial arts background -- Igor trained in karate, wrestling, Judo, Sambo and kickboxing -- with a formidable athleticism. He topped it off with the kind of inscrutable Russian stoicism that MMA fans have learned to associate with Fedor Emelianenko.

For the next 30 months, Zinoviev was at or near the top of everyone's list of top fighters in the game. His reputation reached its zenith when he mauled Shooto's heavyweight (199lbs) champ Enson Inoue at Vale Tudo Japan 1996.

That was the third annual installment of Japan's first (almost) No Holds Barred event. The fighters wore gloves and no elbows were allowed, it was the event that laid the ground work for the later Pride rules set. Rickson Gracie had established his reputation at the 1994 and 1995 Vale Tudo Japan events.

Igor didn't do anything fancy against Inoue. No, he just let Enson pull guard and proceeded to knock him the f__k out. In 44 seconds. Here's the ending:

A couple of defenses of his Extreme Fighting title later and Igor was ready to move on to the UFC. Expectations were high for his debut in a middleweight (200lbs) title fight against Frank Shamrock. Shamrock had won the title by arm-barring Olympic gold medal freestyle wrestler Kevin Jackson in 16 seconds. The smart money said that Zinoviev was too canny to fall into an easy submission and that he was likely too physical for the younger Shamrock.

After all, Shamrock had been worn down by the brutality of John Lober in his NHB debut and Zinoviev had taken everything Lober could dish out in their EFC bout (a tie that would have been an easy decision win for Igor had there been judges).

Unfortunately for Igor and his fans, Shamrock had noticed a different, but very glaring weakness in Zinoviev's game -- when opponents shot in for a take down, instead of sprawling, Igor would grab a headlock and turtle around his opponent's body. That generally set him up well to pull guard and ride out a submission attack. Unfortunately, it also made it very easy to do this:

Yup, Shamrock slammed Igor unconscious, shattered his collar bone and ended his career all in 22 seconds.

Looking back on Igor's career from the perspective of online fight finder databases, it's easy to dismiss a guy who went 4-1-2 in a 2 and 1/2 year career as less than a significant factor in MMA history.

That's where you're wrong. Anyone who was paying attention at the time had a hearty respect for the accomplishments of Igor Zinoviev, the man who showed America that Brazilian Jiu Jitsu was just an effective fighting style, not an invincible secret formula.

(Gifs by Grappo of Bloody Elbow)