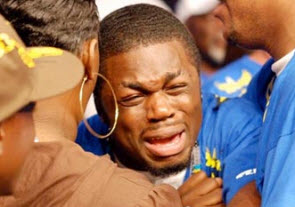 That's Kevin Ferguson II back in 2008 reacting to his father Kevin Ferguson I, aka Kimbo Slice, losing to Seth Petruzelli. Since then the youngster has emerged as one of South Florida's hottest football prospects. He's a 6'1", 195 pound 16 year old with a 3.2 GPA at Booker T. Washington High School.

Video interview with the younger Ferguson after the jump.

Kimbo was a star high school football player at Miami's Palmetto High back in the day. He later spent some time on with the Miami Hurricanes, but Hurricane Andrew destroyed his home and set back his football career. He did walk on to the Miami Dolphins and made the pre-season squad but got cut before the season started.

Kevin Jr. spoke to the Miami Sun Sentinel about his famous dad:

"He wasn't always famous. We've been regular," says his son Kevin Jr., who will be a junior running back at Miami Booker T. Washington High this season, transferring from Miramar High where he transferred to last year after playing his freshman season at Coral Springs.

He bounces between the Miami-area homes of his mother (Shontay Ferguson), where he stays when his dad is out of town, and he stays with his father when he's home.

"He's a cool dad. He's more like a brother to me, but you also have to keep the respect there because he's also our father ... not just our friend."