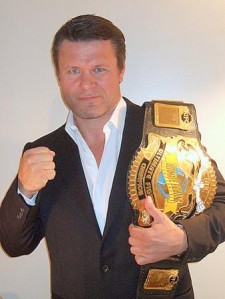 UFC 6 was the first UFC I ever saw live on pay-per-view. I'd seen the videos for UFC 2, 3, and 4 by that point so I was expecting to see some Brazilian dudes tapping people out left and right with secret submission holds I didn't know were possible .

But I wasn't ready for David "Tank" Abbott, a burly brawler with a background in collegiate wrestling and some boxing skills. Tank cracked fools hard through the first two rounds of the eight man tournament and had everyone I was watching with completely gobsmacked and awestruck. No one was thinking much about Oleg Taktarov, the man he was going to meet in the finals.

No one but me that is. Seeing Royce Gracie's epic wins had made me a big-time believer in grappling. Seeing Oleg Taktarov, a mild-mannered Russian grappler get two quick tap outs to advance to the finals gave me hope that brains would beat brawn in the final. I just knew the skilled Russian would unleash a submission hold and force Tank to tap.

Well Oleg did get the tap out, but it took more than skill to beat the fearsome Tank. Despite his nickname being "The Russian Bear", Oleg was the one who seemed to be locked in the cage with a grizzly. Tank had a huge advantage in raw power and in the early moments of the fight, he threw hard punches and threw Oleg around the cage.

But Oleg had incredible heart, an incredible chin and an indomitable will. As Tank tired and gasped in the thin Wyoming air, Oleg maintained the same methodical pace and finally got on an utterly spent Tank's back and applied the rear naked choke. 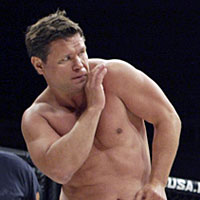 Oleg Taktarov, a former KGB martial arts instructor with a couple of World Sambo Championship belts to his name, had come to the U.S. to act in movies. He found it was easier to get gigs in the cage than in front of the cameras. He began training at Ken Shamrock's Lion's Den and soon found himself in the UFC.

Dan Severn made short work of Oleg at UFC 5, but he grabbed the glory at the next UFC. He went on to fight Ken Shamrock to a draw at UFC 7, in a fight that would have been an easy win for Shamrock had there been judges in those days. Both men later said it was hard to go all out against each other after training together at the Lion's Den.

Then he lost again to Dan Severn in the finals of "The Ultimate Ultimate" after beating the vaunted Marco Ruas in the semi-finals. Severn dominated the fight, but Taktarov was game and nearly tapped Severn at least twice with submission attacks.

Oleg left the UFC for greener pastures at that point. He signed with MARS to headline their big budget pay-per-view debut against Renzo Gracie. Unfortunately, Oleg lost to Renzo via the first upkick KO seen in modern MMA.

Oleg kept fighting. He went down to Brazil for a rematch with Marco Ruas, this time on Ruas' home turf. Again it was a slow paced stinker of a fight, but without a tournament to force a decision, was ruled a tie.

He then went on to score an uncharacteristic one punch KO over Sean Alvarez before accepting a lucrative offer to fight in Japan's newest promotion, Pride Fighting Championships. Unfortunately, Gary Goodridge pasted Oleg with a one punch KO and Oleg Taktarov was done as a high level attraction in MMA.

It was a good run and for many American fans, Oleg epitomized the favorable view of Russians we had at the time. He was quiet. He was durable and determined, dangerous but not frightening.

Oleg also introduced Sambo, the top secret martial art of the Soviet military during the Cold War, to American fans. Japanese fans already knew about Sambo thanks to the guy we'll discuss in the next installment.

Oleg attempted an MMA come back in 2007-2008 and tapped out fellow MMA memory Mark Kerr at the notorious YAMMA event.

Oh yeah, he did eventually get that Hollywood acting thing going on. He's got 29 film credits in his IMDB entry including Predators (2010) and 15 Minutes starring Robert DeNiro.

As an extra bonus, Grappo from Bloody Elbow has made a couple of gifs showing Oleg's submission acumen in action. Ben Thapa, who covers grappling for Bloody Elbow has more in-depth analysis. First up, Oleg vs Dave Beneteau at UFC 6:

Here we see the very first instance of a fighter dropping to guard to pull off an arm-in guillotine in UFC history. The roll that Oleg starts the move with is a beauty that I don't think I've seen since. Beneteau, an accomplished amateur wrestler, has a crouching Oleg in a body lock and he leans back for the throw, but Oleg rolls with his momentum, dropping Beneteau to the floor and continuing to roll free. In the ensuing scramble he grabs Beneteau's neck, locks in the guillotine and moves into guard where he forces the tap.

After a scramble created by Beneteau tossing Oleg to the mats, Beneteau goes for a sloppy takedown and Oleg gets an overhook on Beneteau's right arm and starts to control Beneteau's head with his own right arm. Beneteau leaves his neck exposed and Oleg brings the head controlling arm even further downwards and transitions into a classic arm-in guillotine. Note that Oleg's knees come up to prevent Beneteau from coming around to side control - which would relieve the pressure the guillotine is placing on his neck and carotids. The last section of the gif has Oleg holding on confidently until Beneteau taps.

Next, here's the rematch at the Ultimate Ultimate 1995 tournament:

This time Oleg drops and rolls to attack Beneteau's right leg. He looks for a heel hook briefly but then settles on an achilles lock. Beneteau kicks Oleg in the face -- a move that would be illegal today since you can't kick the head of a grounded opponent -- and then quickly taps out.

Taktarov and Beneteau are in a clinch and the unsuspecting Beneteau has allowed Taktarov to cleverly position himself off-center to go for one of sambo's greatest staples: the rolling leglock. As Oleg starts to drop, he kicks his left foot up into the space behind Dave's right knee and leg. This is crucial for the controlling of the leg that is to follow. As Oleg continues his drop and rolls over his right shoulder, Dave senses that something is wrong and starts attempting to collapse. Taktarov has already anticipated this and he puts his left arm out to keep Beneteau's legs separate, so he can struggle through if needed. Oleg's right arm is starting to control the foot and true to sambo form, he wants a kneebar on Dave. He brings the right foot back to cross it over his left foot in a position behind Beneteau's leg.

However, Dave has managed to struggle back upright and his foot moves outwards as he tries to turn into Oleg. With the kneebar set-up not being ideal, Oleg continues to maintain control of the leg and allows Dave to continue turning. Once Beneteau has turned into Taktarov fully, Oleg has gotten Dave's foot in a great position for a cross-body heel hook or ankle lock and uses a momentary straightening of his legs to off-balance Dave. With that tiny push, Beneteau topples to the mat and half-heartedly tries to get closer to Taktarov. One of the usual leglock defenses is to scootch up close and then grip fight to free the trapped leg. This doesn't work and Beneteau actually helps finish himself, as he leans back and switches tactics to go for a kick with the free foot. That allows Oleg to extend the trapped leg and place his hands just right to finish the cross-body heel hook. This is pure, raw sambo and displays wonderful awareness of the chains of leglocks possible from that position.

*Note that there's all kinds of different names for the roll and the leglocks attempted and achieved - in English, Russian, Portuguese, Japanese or the other languages leglocks are discussed in.