Does Fedor Vs. Henderson Matter?

Share All sharing options for: Does Fedor Vs. Henderson Matter? 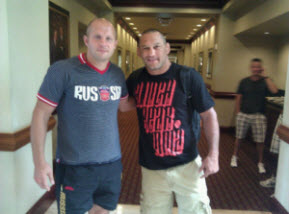 This Saturday we've got Strikeforce: Fedor vs. Henderson featuring two of the greatest MMA fighters of all time: Fedor Emelianenko and Dan Henderson. Both men were champions in Pride and Henderson fought for two UFC titles as well. Henderson is even the current Strikeforce light heavyweight champion.

But none of that "matters". The bout isn't meaningful, relevant, significant or packed with implications for the future of MMA.

So what. It's still a great fight that I can't wait to see.

It's one of MMA's most cherished myths that the sport is supposed to somehow determine who the "best" is. Leaving aside the utter impossibility of that quest, it's clear that Fedor vs Henderson has no relevance by that criteria.

Henderson may be Strikeforce's best at 205lbs (which means he's the 8th best LHW in the world per the USA TODAY/MMA Nation Consensus MMA Rankings) but this fight is being contested at heavyweight. That makes it essentially a gimme for Henderson. If he loses, so what he's not a heavyweight. If he wins... damn, he just beat a legend.

Except Fedor, the legend in question, is coming off two straight losses and hasn't looked like the same invincible Russian cyborg that terrorized Pride since he mauled Tim Sylvia at the first Affliction show.

The most tangible consequence of this fight will be whether or not Strikeforce/Zuffa decide to bring Fedor back if he loses a third straight fight. I'm guessing M-1 Global has a guaranteed contract that prevents Fedor from being cut after a loss, but who knows.

Regardless, it promises to be a fairly evenly matched fight between two of the most beloved legends of the sport. I can't wait.