Dan Henderson: Anderson Silva Is 'Manipulating' Who He Fights

Share All sharing options for: Dan Henderson: Anderson Silva Is 'Manipulating' Who He Fights 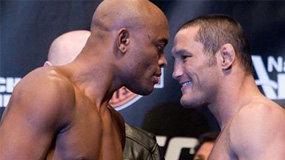 With the UFC middleweight title picture already set -- and Henderson on the outside looking in -- the 41-year-old has joined Chael Sonnen in his crusade against the legitimacy of Silva's reign.

On this week's MMA Hour Henderson issued some of his most damning accusations yet, claiming that "The Spider" has resorted to underhanded measures to ensure he retires without an additional loss on his record.

"[Anderson Silva's camp has] done a really good job at kind of manipulating who they fight, who they don't want to fight," Henderson said. "He's conveniently injured quite a bit."

"[Silva] wants to ensure that he retires for the next how many fights he has without losing," Henderson said. "Anybody that has a chance of beating him he doesn't want to fight. That's just my take on it. Obviously, Chael has shown he'd probably beat him up if they ever fought again as long as he doesn't get caught with something stupid at the end of the fight."