Share All sharing options for: Dan Henderson Makes His Case For Being A Tough Test For Jon Jones 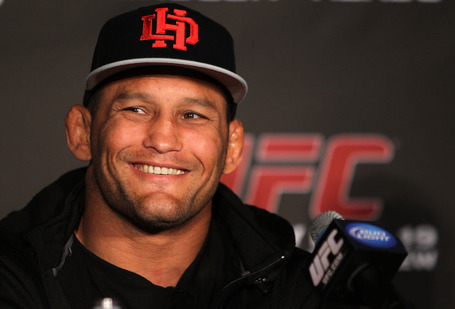 Former Strikeforce light heavyweight champion Dan Henderson appeared on The Savage Dog Show recently and essentially argued his best case for why he'd be uniquely troubling for UFC light heavyweight champion Jon Jones. After recently besting Mauricio Rua at UFC 139, Henderson is hoping he can fast-track to a title shot even if the Rashad Evans vs. Phil Davis winner at UFC on Fox 2 is more likely to do so. Still, here's Henderson's argument:

"I think I’m a tough fight for anybody," Henderson said. "If you’re in a fight with me, you’re definitely going to know you’re in a fight. I don’t know if really Jon Jones has felt that too much in his career. I definitely would test that out. I think style-wise I match up real well with him."

"It’s unfortunate that Rashad got hurt, but you know, it’s happened twice now," Henderson said. "He’s had people step in. … All I know is, if I have to, I’ll pull out the age card and just say I should have seniority here. I’m getting older. Rashad’s got a little more time than I do."

"That’s pretty much one of the last things I’ve got on my list for my career," Henderson said, "to get a UFC title and keep it for a little while."

There isn't a ton of X's and O's discussion here. In short, Henderson believes Jones hasn't been really roughed up in a fight and as a fighter who presses the attack with hard strikes (especially early), he'd force Jones to answer the still (sort of) unreasolved questions about his recovery abilities.

He might have a point. I'd certainly like to see Henderson get the opportunity. But the two-time Olympian kind of overstates the case. He's right that no matter who you are, eventually someone is going to tag you in MMA. And when they do, all bets are off. Some fighters respond favorably. Others do not. A fighter who has made it as far as Jones without really ever having to work out of terrible spots may not respond as appropriately as a fighter who has had to a take a few lumps in bad spots as he rose through the ranks.

Still, Henderson notes Jones hasn't been in that spot yet precisely because he's difficult to hit. Second, other fighters have made contact with Jones. Andre Gusmao and Quinton Jackson chief among them. They didn't land on Jones flush, no, but it's not as if Jones hasn't faced meaningful adversity with potent offenses. Getting rocked is admittedly a different experience to deal with. But Jones doesn't turtle at the slightest inclination of pain and makes putting him in a position to be badly hurt a very daunting challenge.

Oh, and Henderson predicts Jones will defeat Lyoto Machida at UFC 140 this weekend.