Share All sharing options for: Dan Henderson Not-So-Subtly Implies That Anderson Silva Is Ducking Him And Chael Sonnen 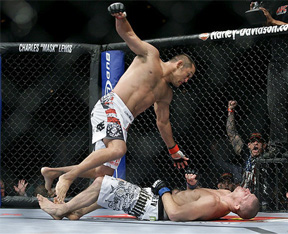 Following Michael Bisping's entry into the middleweight title picture on Saturday, Dan Henderson had some choice words about the idea of a Michael Bisping vs. Anderson Silva match-up.

Chael Sonnen has been rather upfront with his belief that UFC middleweight champion Anderson Silva is ducking him. With "The Spider" sidelined with lingering injuries until further notice, Sonnen eventually abandoned his guaranteed title shot to fight Mark Munoz at UFC on Fox 2.

Now Dan Henderson finds himself in a similar situation, eyeing a shot at the 185-pound or 205-pound belt, and repeatedly stating his desire for a rematch with Silva. Regardless, the Brazilian's uncertain status likely means that Henderson will be forced to move on with his light heavyweight crusade, and he's not happy about it.

Nik_juniorNik Powers
@danhendo do you agree with all these crazies claiming Bisping deserves the next shot??
Dec 04FavoriteRetweetReply

@danhendo
Dan Henderson@Nik_junior All the "injuries" that keep Anderson from a rematch w/ me or Chael will heal real fast if they offer Bisping to him.
Dec 04 via SeesmicFavoriteRetweetReply