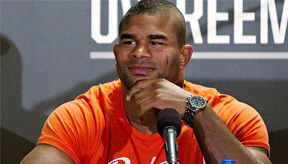 Alistair Overeem may be swimming in legal trouble, but the heavyweight striker should be just fine after his hefty UFC 141 payday.

A notable tidbit lost in ESPN's report of Knock Out Investments/Golden Glory's lawsuit against Overeem was details of the Dutchman's UFC contract, which was referred to as "one of the largest MMA agreements in the history of the sport." Drinks on "The Reem" for New Year's Eve?

Pursuant to the terms of Overeem's UFC contract as outlined in the complaint, he is guaranteed a "bout fee" of $264,285 on Dec. 30. Should he defeat Lesnar, Overeem would receive an additional $121,428 "win bonus." Overeem is also in line to receive a $2 pay-per-view bonus per viewer, "for all revenues received by UFC-Zuffa for telecast of the Lesnar fight in the United States, Canada or over the internet in excess of $500,000."

Terms of the contract also guarantee Zuffa would pay Overeem $1 million spread out evenly over the first three fights of his deal, which is potentially good for up to eight bouts. Overeem is also expected to receive intellectual property payments for worldwide marketing of his likeness or image.