UFC 141: It's Alistair Overeem, Not Brock Lesnar, Who 'Can't Take A Punch'

Share All sharing options for: UFC 141: It's Alistair Overeem, Not Brock Lesnar, Who 'Can't Take A Punch' 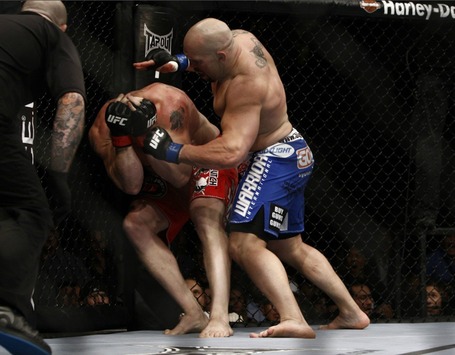 The conventional wisdom heading into tomorrow's UFC 141 showdown between Brock Lesnar and Alistair Overeem is that the former UFC heavyweight champion 'doesn't like to get hit' or 'can't take a punch'. While it's true Lesnar loses composure under fire, I'd challenge the idea he doesn't absorb damage as well as Overeem.

I'd first point you to this fantastic FanPost over at Bloody Elbow that details the intracacies of Overeem's striking. There are a number of takeaways there, but the most notable is the tradeoff apparently in Overeem's power for safety that's visible in his MMA striking. Read the entire thing.

I'm not here to break down the eccentricities of either's striking game, but rather, their ability to take punishment.

For Lesnar, much of the criticism is justified. He quite clearly loses bearing when being hit, at least as it relates to the face. If you take into account the submission loss to Frank Mir, you could make a case that more than just strikes, Lesnar doesn't react to pain very well. Mir's kneebar wasn't even close to locked in fully. Lesnar's ankle was buried in Mir's chest, typically a placement too low to work. Perhaps it was inexperience more than a weak pain tolerance or focus, but he did tap comparatively early.

But here's the rub. Lesnar's done something early in his career that Overeem (to the best of my memory) has never done: come from behind to win after being badly hurt. At UFC 116, Lesnar was reeling and being hit with devastating punches and elbows from an attacking Shane Carwin. Yet, throughout everything, he remained (mostly) calm, adhered to referee Josh Rosenthal's instructions and managed to hang on long enough to turn the tide. He was nearly finished, lost a clear 10-8 round and still managed to win by submission minutes into the second frame. To the best of my knowledge, whenever Overeem's been hurt that badly, he's never stormed back to win. More often that not, he's lost if not been outright stopped.

Then there's the other problem. It's true Overeem doesn't nearly have the composure problems Lesnar exhibits in striking. But he also doesn't have the capacity to absorb damage such that he can stay conscious as well as Lesnar. Overeem's chin is by no means bad. It's also not incredible. It's somewhere hovering in the middle, although at heavyweight it hasn't really been tested much. But at light heavyweight (and in professional kickboxing), Overeem's lights have been shut off. If not completely unconscious, Overeem's been rendered the functional equivalent on multiple occasions. Most of those times have come against elite fighters who landed blazing shots. While Lesnar is unlikely to cause damage akin to that standing, he is more than capable of doing so from top control, ground and pound positions. Notably, Overeem's been finished with strikes (to the point of being essentially unconscious) from that position as well.

Admittedly, even conscious Lesnar's also been rendered the functional equivalent of unconscious. Turtling up against Cain Velasquez was no demonstration of grit. But so long as you're conscious, you're able to (in theory) fight back. And against Overeem, who does not posses the same defensive wrestling skill set or volume punch style as Velasquez, that's a noteworthy ace in the (fox) hole.