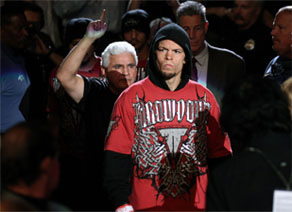 There are a lot of words to describe the Diaz brothers, but dishonest isn't one of them.

Both Nick and Nate have proven a willingness to say whatever is on their mind and Tuesday was no exception.

At the UFC 141 open workouts, MMA Fighting's Ariel Helwani asked Nate to explain recent statements Nick made about being sick of fighting. As should be expected, the answer Helwani received was surprisingly candid, if somewhat unexpected.

I think what he's trying to say is, the way this sport is, the way it goes, it doesn't favor the better fighters. I like good fighters and I can appreciate really good fighters. The best card I could have imagined was (Mauricio) Shogun (Rua) vs. (Dan) Henderson and Wanderlei (Silva). It was just like a step back in time, only with a cage. I remember watching Henderson and (Murilo) "Ninja" Rua fight, and that was one of my favorite fights because that was one of my favorite fighters at the time.

So I can appreciate really good fights and fighters. But I can appreciate wrestlers too, and the way stuff goes, but I don't like how it favors them and I don't like how you're going have all the champions be collegiate wrestlers just because they're better... this is the Ultimate Fighting Championship, not the Ultimate Wrestling Championship. So whenever you have a guy in there fighting and trying to damage his opponent, and just like do good technical stuff, that's an art, compared to athleticism. Cause we could do that too, that athleticism stuff, but it's just good to see good martial artists.