Duane Ludwig Gets An Early Christmas Present From Dana White

Share All sharing options for: Duane Ludwig Gets An Early Christmas Present From Dana White 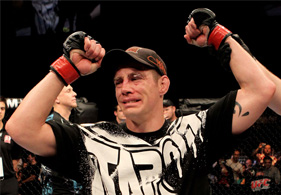 After five years of campaigning, countless petitions, and an official inquest to the Nevada State Athletic Commission (NSAC), Duane Ludwig's four-second knockout of Jonathan Goulet has finally been recognized as the fastest knockout in UFC history.

DUANEBANGCOMDuane Ludwig
I must say @danawhite is such a cool guy! Much love and respect for him an all the @ufc crew! Great people!!!
Dec 24FavoriteRetweetReply

Ludwig's plight first caught the ears of White earlier this month, when MMA Fighting's Ariel Helwani grilled the UFC President following Chan Sung Jung's "record-tying" seven-second KO of Mark Hominick. After a long back-an-forth, White promised, "I'll see what I can do. I'm on it."

Though it should be noted that while the knockout has been rectified in the UFC's books, the NSAC has proven to be a tougher nut to crack. So far the commission has staunchly refused to change the official time of bout, proving once again that bureaucracy is one of the few things immune to the holiday season.