Share All sharing options for: Satoshi Ishii Makes The Worst Kind Of Prediction For Fedor Emelianenko 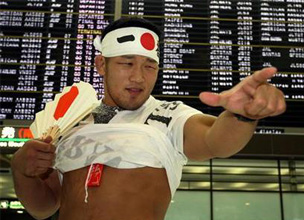 In a sport built on bluster and hype, no one bats an eye when alpha-male fighters predict victory by "first-round smashing" or "taking an arm home."

Rarely will a fighter sway to the side of honesty and publicly state his desire to eek out a decision. But then again, rarely does a man with six professional fights prepare for one of mixed martial arts' premiere legends.

In a recent interview with Lowkick, Olympic Gold Medalist Satoshi Ishii replied with surprising candidness when asked about his chances against Fedor Emelianenko at DREAM: New Year! 2011.

"I would not say that I have any real advantage over Fedor. The man is a legend and has faced all styles. But I am confident wherever this fight goes... Fedor has been at this a very long time and has fought everyone. I respect his accomplishments and look up to him. It is a complete honor to step in the ring with him... I feel that I will win this fight via decision. I am no longer just a Judoko. Fans will see how far my striking, wrestling, and grappling have come since I started MMA."