The Best Of MMA Nation On The Round Up

A look back at some of MMA Nation's best content from 2011 including original interviews, analysis and histories of the UFC and mixed martial arts.

Share All sharing options for: The Best Of MMA Nation On The Round Up

If you're online on this slow holiday looking for MMA stories to read, search no more. Here's a handy one stop guide to the best work of MMA Nation from 2011. Consider those hours killed.

Our most popular feature of the year was Jonathan Snowden's "The Economics Of MMA: How Much Does It Cost To Be A Fighter?":

As the UFC has become a big business, the fighters have started to make what seems like a pretty good living. But preparing for a main event contest with an eight week training camp can be an expensive proposition. The UFC announced earlier this year that they would cover a fighter's health insurance while they are actively preparing for a UFC bout. That's great news.

The next step is covering a fighter's training expenses. It's part of what a promoter provides in boxing - for example, Miguel Cotto was paid $120,000 to prepare for his fight with Manny Pacquiao. In MMA, fighters are on their own for those costs.

How much does a fighter, earning a seemingly enormous $250,000, actually take home at the end of the night? I talked with a number of fighters, managers, and assorted MMA industry figures to find out.

Here's the cost of doing business in MMA

If you're more interested in the technical side of fighting we answered the question Exactly How Did Frank Mir Break Nogueira's Arm? by calling on a BJJ black belt and using some animated gifs.

"Once in side control, Mir has the correct angles to get Big Nog's arm into the right positions. He has his left hand pinning Nogueira's right wrist to the ground and his right hand snaking underneath Big Nog's upper arm and locked onto his own left wrist. This is the classic figure four double wristlock that judokas call the reverse ude garami and BJJ players the "kimura". The submission is essentially set now. Mir steps over the head - or at least tries to - and smashes his chest downwards as Nog looks like he knows exactly what is coming and wants no part of it. At this point, Frank's massive static strength is starting to take over. Big Nog's right arm is being dragged into the classic right angle required for the reverse ude garami. The pressure of Mir's bodyweight is considerable, yet the location of his body allows Nogueira to upend him in an attempt to alleviate the increasing torque on the arm. Big Nog wants to straighten that arm out and shake loose from the double wristlocks grips, but it does not work."

That's the set up, to see the snap read the full article.

If you're looking for some hand-wringing and concern about the cultural impact of MMA, look no more as I asked, "Is MMA Goon Culture Staining The Sport?"

That's what two Ohio aspiring MMA fighters found out when they got into a brawl at a party and one of them ended up battered, choked and left to die alone in the woods.

We also gave you some analysis of the behind the scenes politics that results in fights being booked, or not being booked in Thomas Myers' Cesar Gracie, The Diabolical Genius Calling The UFC's Welterweight Shots:

Cesar Gracie pulled off back-to-back matchmaking coups in less than five weeks, masterfully getting his prized fighter, Nick Diaz, into two UFC main events and a title shot against Georges St. Pierre. He had some help along the way, but his behind-the-scenes manipulation was pure genius.

If you're interested in some interviews with athletes who may very well be the future of MMA, Luke Thomas has you covered. He interviewed the NCAA national champion Jordan Burroughs:

Jordan Burroughs, one of America's premier talents in amateur wrestling, tells MMA Nation he is 'definitely' interested in a career in mixed martial arts. The catch? We'll all have to wait until he's done wrestling.

Olympic gold medalist Henry Cejudo - the youngest American wrestler to ever earn that distinction - talks about entering the sport of mixed martial arts, why MMA is both easier than wrestling as well as hurting it, his plans for the 2012 London games, being a UFC fan and more.

Thomas Myers had a great interview with Dan Hardy:

Thomas Myers, MMA Nation: Are there any other superstitions or rituals that you need to address prior to getting into a fight?

Dan Hardy: Sure, I do lots of weird little things, even down to the way I brush my teeth on fight day. I just like to have a routine that I'm comfortable with that I know is stable and regular. I don't no if it's a superstition, but more of a system so that I don't have to think about anything on fight day, everything is all laid out and I know what I'm going to do at each step. I wake up, brush my teeth, take my supplements, eat, rest. That sort of thing. Even the foods I eat on fight day are always the same. It's a regular thing. This way my only focus is the fight. I don't have to think because I'm on auto pilot.

Thomas Myers, MMA Nation: So how will you brush your teeth differently on Sunday rather than tonight?

Dan Hardy: (Laughs) It's more about the time and energy that I put into it more than anything else. It's more of a meditation thing. I floss and brush and floss and brush. Then I use mouthwash. It takes about 15 or 20 minutes, and during that time I'm just alone in the bathroom, thinking about the fight. I'm not talking to anybody or having anything else to think about. It gives me some important time to be by myself and get myself ready for the day.

If MMA history is more your speed, I told the tale of Five Former Soviet Fighters Who Pioneered Modern MMA:

I also told the tale of The Long Strange Journey From Vale Tudo To Mixed Martial Arts In Brazil: 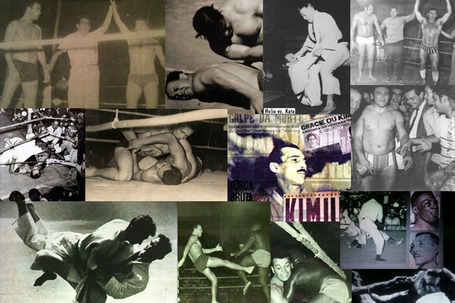 A picture's worth a thousand words, but if you want to know more about the old school fighters in the picture above, read the whole thing.

And we'll wrap things up with Luke's interview with Dave Meltzer, the sage of the PPV business:

'Big Nog' Has Surgery, Pulver And Sapp Get KO'd On The Round-Up