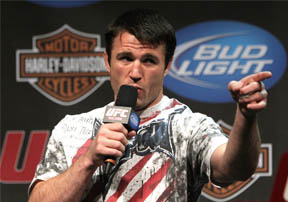 Let's call it a Christmas miracle.

If your holiday wish was for Chael Sonnen to end his crusade against Anderson Silva, you might be in luck. The brash middleweight appeared on TSN's Off the Record on Friday, and declared his intentions to move on from his longtime foil while talking with Michael Landsberg. Move on to who, you ask? Peep the quote after the jump.

The bottom line is, I'm done with the guy. He and I have no business. This guy is cold product man. He's like jheri curls and Pepsi Clear. He's yesterday's news. I destroyed this guy back when he was tough. That was years ago. He's so far over the hill and past his prime it's not worth talking about.

You know, I'm going to become the number-one contender on January 28th, but despite what you may think, I am not going to use that voucher to fight Anderson Silva. Okay? I'll be looking at (Junior) dos Santos, (Jon) Jones, and possibly (Georges) St. Pierre. I will take that voucher to Dana White and I will pick one of those three guys. My time with Anderson is done.

Look, I'm going after a championship match. Anderson Silva is no more the champion than the man on the moon, and trying to pretend he is, is a waste of my breath. Jon Jones is a real man that'll accept challenges.