Georges St. Pierre Named One Of 2011's 'Most Overhyped Athletes'

Share All sharing options for: Georges St. Pierre Named One Of 2011's 'Most Overhyped Athletes' 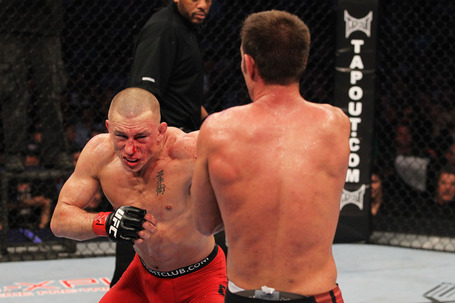 Perry Lefko, a writer for Canada's Sportsnet.ca, compiled a list of what he views are the most overhyped athletes of 2011. The list runs the gamut of sports and includes basketball's Kris Humphris (former husband of Kim Kardashian), NASCAR's Danica Patrick and relevant to our world, UFC welterweight champion Georges St. Pierre (GSP). In short, Lefko questions UFC President Dana White's claim GSP is Canada's most popular athlete now or ever and underscores the prevailing criticism of St. Pierre, namely, that the champion fights 'not to lose' rather than to win.

Ultimate Fighting Championship president Dana White said in December 2011 that St-Pierre is still the most popular athlete in Canada in terms of his international recognition -- we're not so sure about that -- but the welterweight champion is sidelined indefinitely with damaged knee ligaments. And even before his injury, St-Pierre was taking verbal shots from the public, the media and fighters for his inability to put away opponents.

He grabbed the international spotlight in April for headlining the first UFC card in Toronto, producing GSP mania. A record UFC crowd of more than 55,000 packed the Rogers Centre to finally see the conquering Canadian hero and he went the full five rounds with Jake Shields in what was more of a clinic on how not to lose a fight than actually win it.

Yes, GSP had problems seeing out of one eye because of a shot in the fight, but we've seen fighters with far bigger issues turn it up a notch. It was boring at best and continued a pattern of St-Pierre going the full distance without delivering the knockout blow or submission. Heck, the fight before it on the card was way more entertaining than the main event.

My own take on GSP's risk aversion can be read here, but it doesn't ape the conventional 'GSP is boring!' tripe. There's a more important argument about why his efforts are problematic: his own stated goals and legacy.

I'd only add here that when I wrote my take on GSP's risk aversion in the cage, I was greeted with skepticism, dismissal or derision. I'm not saying I agree with Lefko's analysis particularly, but the idea GSP 'fights safe' (or however you wish to characterize it) is now near universally accepted.