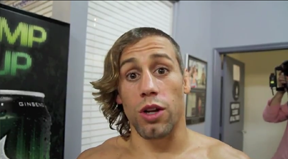 Earlier this week, Urijah Faber tweeted he would be shaving his trademark surfer-style mop as a sign of solidarity to his recovering sister.

Video of the buzzing after the jump.

Faber's 19-year-old sister, Michaela, was tragically involved in a major car accident the day after Thanksgiving and has been hospitalized since. After undergoing brain surgery she is scheduled to be released on Friday, though her procedure required her head to be shaved. The way Faber figured it, she shouldn't have to be the only one without any hair for the holidays.

According to Faber, it's been roughly 12 years since he last sported such a close crop. Regardless of what you think of the TUF 15 bantamweight coach, even the coldest hearts should be warmed by this sibling gesture.