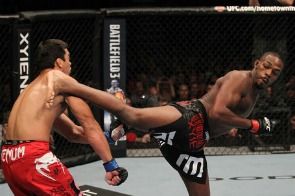 Mike Winkeljohn, the striking coach for UFC light heavyweight champion Jon Jones, spoke to Sherdog Radio and made some pretty big claims for the striking prowess of his fighter. Jones struggled for a round on the feet against Lyoto Machida before winning the fight in the second round with ground and pound. Quotes after the jump:

"He's capable of so many more things that he does in the gym quite often. He has knockout power in both hands when he wants to throw them. He's just at that point where he doesn't have enough experience yet to trust his motion and his distancing as Anderson Silva does now. But soon, he'll be Anderson Silva-like with his standup.
...
"The sky's the limit for the kid. People don't understand. He does have knockout power in both hands, and his feet are getting to the point where people don't want to be taking those kicks. They will be at the highest K-1 kickboxing level here soon. It's just a matter of time through repetition and confidence to get there. People haven't seen how explosive his knees are. We've seen him drop elbows on people, but he can do that standing up as well. I know one buzzed by Machida early in the fight. He's capable of becoming so much better than he is right now. He's just scary. I don't know what people are going to do with him. Really. He's getting faster. I think he's going to have a jab that's going to be comparable to a Muhammad Ali jab as far as dominating his opponent when he wants to use it."