Fedor Emelianenko: I Have A Desire To Fight In The UFC

Share All sharing options for: Fedor Emelianenko: I Have A Desire To Fight In The UFC 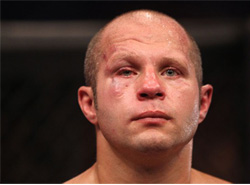 The never-ending saga between the UFC and Fedor Emelianenko's M-1 management is filled with as many twists and turns as one story can hold, and by now has surely tried the patience of even the steeliest mixed martial arts fans.

Making matters even more frustrating, throughout the entire process it never seemed like we heard from the man himself, but instead a vague team of handlers with dubious motivations.

But that changed earlier this week.

Perhaps he sensed the exasperation or felt emboldened by M-1's recent offer, but whatever the reason, Emelianenko broke his silence and extended somewhat of an olive branch to the UFC in a prolonged interview with Russian outlet Sportbox.ru. (Translation via The Underground).

It's about titles. Of course I would like in UFC too, but to this day, all the times we had negotiations with them... possibly they have allergy on me (laughs), and for some reason we can't make an agreement now. Vadim [Finkelstein] met them, but for example if we had some agreement in talk, the contract that they sent then were different. But I have a desire to compete in UFC.