M-1 Global: Fedor Vs. Monson Ratings Closer To 2.5 Million, According To Meltzer

Share All sharing options for: M-1 Global: Fedor Vs. Monson Ratings Closer To 2.5 Million, According To Meltzer 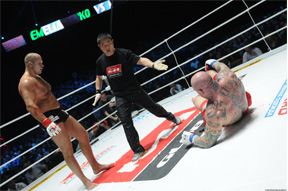 Somehow it seems like the ratings for M-1 Global: Fedor vs. Monson are in direct proportion to the amount of time since the event took place.

Now a report from Yahoo Sports' Dave Meltzer has the ratings dropping even further.

According to Meltzer, the live show -- aired on state-operated sports network Rossiya-2 -- pulled a 2.7 rating and 9.2 share throughout Russia. Those figures suggest the actual number for live viewers arrived at just under 2.5 million.

While 2.5 million is still an extremely good ratings figure, especially for M-1, it is a far cry from the initial claims of promotion officials.