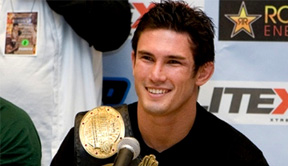 K.J. Noons is no stranger to mid-fight trash talk.

So needless to say, it wasn't that surprising to see the 29-year-old jawing back and forth with Billy Evangelista in the heat of the pair's Strikeforce: Melendez vs. Masvidal bout. Though the conversation probably went a little differently than you'd expect.

In the aftermath of the post-fight press conference, Noon's revealed the amusing subject matter of the exchange (via MMA Weekly):

It seems like a lot of my fights, we're always talking in the ring, but this one wasn't s*** talking this time. I think he felt like it was close.

The last 30 seconds, he said, "Let's just stand and bang and give the fans a fight."

He goes, "No takedowns."

The two proceeded to throw caution to the wind for the final thirty seconds of what was an exciting back-and-forth fight. Ultimately Noons earned the judge's nod by a unanimous tally of 29-28, snapping a two-fight losing streak in the process.

For more, catch up on MMA Nation's Strikeforce Melendez vs. Masvidal results and play-by-play coverage.