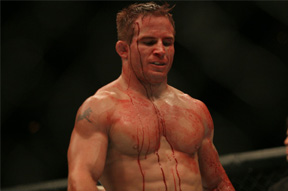 Sherk's caravan was stopped by a police roadblock while travelling through the northern English area of Huddersfield during a seminar tour in the UK. Before the 38-year-old had a chance to process the situation, armed enforcers descended onto the party, believing his vehicle to be linked to a local gang lord.

Then things got a little messy. Fighter's Only explains:

Sherk thought the car was being subjected to a routine stop until it turned out to involve several carloads of police officers carrying automatic weapons, including Hechler and Koch MP5 machine guns - the UK police do not normally carry guns.

Having remained sat in his passenger seat because he had not understood an instruction to exit the vehicle, Sherk was dragged out by tense officers. They cuffed his hands behind his back and pulled him away where he was none too gently searched before being dumped on the floor.

Sherk was eventually released, after a lengthy search of the car discovered absolutely none of the paraphernalia police expected, and is said to have taken the incident in "good spirits".