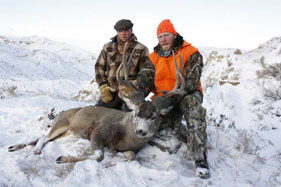 Brock Lesnar and Canada have a rocky relationship.

After previously referring to his northern neighbors as a "third world country" that almost killed him, the former UFC heavyweight champion finds himself in Canada's crosshairs once again following a recent hunting trip gone awry.

Apparently Lesnar, a well-known hunting enthusiast, failed to follow Canadian protocol during a mid-November expedition near Manyberries and now faces accusations for improper handling of hunted game under the Alberta Fish and Wildlife Act. Both he an his cohort, Chad Stryker, were handed down charges on Thursday, though neither appeared in court.

The burly fighter failed to properly tag at least one of two animals his party had shot - a white tail and a mule deer, said Darcy Whiteside, spokesman for Alberta Sustainable Resource Development.

"They shot an animal and didn't tag it," said Whiteside.

His guide and Albertan Chad Stryker, who was allegedly accompanying the celebrity, is also charged with the offences - unlawful possession of wildlife, abandon/wastage of the edible flesh of big game, and after killing wildlife, failure to immediately affix tag.

"In plain language, it would be considered poaching," said Whiteside

Though fight fans shouldn't worry -- UFC 141 is safe. Lesnar's court hearing has been delayed until January 21, 2012.