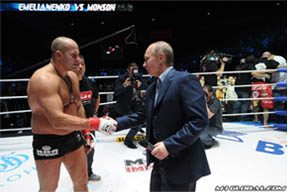 M-1 Global made worldwide headlines when M-1 Global: Fedor vs. Monson hit airwaves on November 20th, though it wasn't for the reason M-1 officials expected.

Following Fedor Emelianenko's unanimous decision win over Jeff Monson, Prime Minister Vladimir Putin stepped into the ring to congratulate the victor, only to be met by a downpour of boos from Russian fans. It was an unheard of display of public dissatisfaction, and one that remains on today's global conscious.

In this week's "The New Yorker", David Remnick uses last month's incident as basis for the question: How far can the resistance to Vladimir Putin go?

Altogether it's a fascinating piece worth a read for those interested in international affairs. Even if we are so far removed from the situation here in the U.S., it's intriguing to think about the birth of such a revolutionary social statement taking place at one of our little MMA events.

When I asked (Dmitri) Peskov about the jeering, he unspooled a convoluted hypothesis about how the crowd might have been reacting to the image of Monson being helped to the locker room: "We called him after that, and he said it's normal that in America when a beaten guy is leaving the hall they often boo." Peskov, being as skillful and as modern as the regime he serves, then switched from bald-faced nonsense to allowing at least part of the truth. "I also heard some voices, three or four men," he said. "Someone really shouted out, ‘Putin, go away!'"

When I asked why state television altered the sound for replays, he said, "They switched off the noise."

"I don't know exactly," Peskov replied. "That was the choice of the editor." Peskov couldn't help smiling at this specimen of disingenuousness. And why did Putin cancel an appointment two nights later to attend an anti-drug concert in St. Petersburg? Instead, the Kremlin sent a deputy prime minister, Dmitri Kozak, to represent United Russia, and so it was poor Kozak who endured the catcalls. "Putin wasn't supposed to go," Peskov said. "Trust me."