Share All sharing options for: UFC's Nick Diaz Mentioned As Possible 'Stocktonian Of The Year' By Hometown Paper 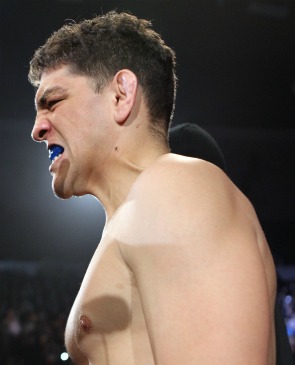 Controversial UFC welterweight number one contender Nick Diaz got a nice shout out from the editor of The Stockton Record who named him a "write-in candidate" for 'Stocktonian of the Year.' Here's the accolade by Mike Klocke:

This isn't about maturity or proper behavior and decision making. The Stockton mixed martial arts fighter has none of those. What he has is talent and presence and - if he can keep (or get) that head of his on his shoulders - the potential to be a Stockton athletic rallying cry, ala Dallas Braden. Perhaps this is a year early. If he can win a huge upcoming fight and learn to act like an adult, maybe we'll have another Yaqui Lopez on our hands.

Diaz will face UFC welterweight champ Georges St. Pierre at UFC 143 on February 4, 2012 at the Mandalay Bay Events Center in Las Vegas, Nevada. I wonder if bringing home the UFC belt to Stockton will be enough to make him more than just an 'also ran" for Stocktonian of the Year.