A preview of the undercard bout between Pawel Wolak and Delvin Rodriguez. The men meet for a second time after battling to a draw in a fight of the year contender earlier this year.

The HBO pay-per-view undercard for the grudge rematch between Antonio Margarito and Miguel Cotto features three very compelling bouts. It's such an unusually good card that the broadcast will open with a rematch of one of the leading contenders for fight of the year when Delvin Rodriguez and Pawel Wolak climb back into the ring.

The first time around the two had a thrilling back and forth war which saw two judges score the bout a draw with the third judge giving Rodriguez the 97-93 edge. It was a special fight that brought the crowd to life, had Teddy Atlas screaming on the ESPN 2 broadcast and caused an immediate buzz on the internet. Even with as great as the fight was the first time around, Scott Christ of Bad Left Hook reminds us in his preview of the fight to be realistic:

Wolak and Rodriguez probably will not live up to the hype of their first fight. We should get that out of the way first. It's a really ridiculous expectation to put on a fight, honestly, to ask it to be as good as the Roseland War from July. I also can never shake the thoughts of some famous rivalries and their second fights: Ali vs Frazier II stunk, and Gatti vs Ward and Barrera vs Morales were fairly strong letdowns the second time around (if still pretty damn good fights) before great third fights in each rivalry.

Scott does go on to say he still expects a very good fight, and I do as well. It's something that just comes through in their styles.

Wolak is a hard guy to try to fight a boring, safe fight against. He's a bull who looks to put his head on your chest and fire shots at your head and body. His pressure style and faith in his stout chin means that it's hard to keep him from using that style.

Rodriguez did a nice job in the first fight of making an early adjustment and firing uppercuts at Wolak who does bend at the waist more than is normally advisable. He also did a nice job of not overreaching and using sharp two and three punch combinations during the moments Wolak was walking forward in his bid to get in close. Those combinations eventually left Wolak with one of the worst hematomas I have ever seen (photo courtesy of Carlos Suarez Jr / Boricua Boxing): 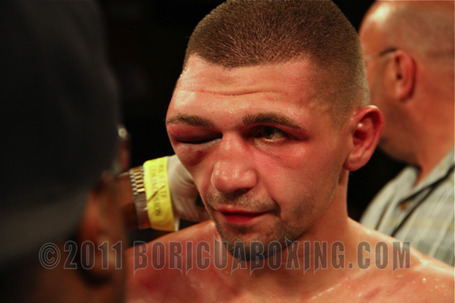 Rodriguez was on a year layoff after feeling like he had been robbed by the judges in three of his previous four fights the first time around (seriously, he may be the best fighter with only 2 wins in his past 7 fights). Which could explain his taking a few rounds to really find a rhythm the first time around.

Wolak claims that he will be fighting "smarter" this time around, but that just seems like a lot to ask. Wolak is who he is, he's not nicknamed "The Raging Bull" because of a cerebral fighting style. If he does try to come out and "box" rather than "fight" I imagine that will only last a round before he gets clipped with a right had by the much taller Rodriguez which flips the switch in Wolak's mind to get back to brawling.

That being said, Rodriguez showed the ability to deal well with Wolak's style the last time around. Wolak pestered him, he made Devin fight an ugly fight but he didn't really seem like the better fighter that night.

I just think Rodriguez has established that he can handle Wolak's style with some degree of success and that forced Wolak to talk about "fighting smarter."

Wolak at his best is still a guy who bends over at the waist, leaving himself open for uppercuts and squares his stance up way more than most boxers, which allowed Rodriguez to outmaneuver him a little bit at times. If this fight looks anything like the last in terms of both men's style, I imagine Rodriguez does a better job of establishing control of the fight.

Pawel will have success at times, but look for Rodriguez to get a win on the scorecards and get his career moving again.