Share All sharing options for: One Last Look Back At UFC 138 On The Round Up

MMA Nation Round-Up provides you with daily coverage of the latest in news, multimedia, and analysis throughout the world of combat sports. We'll be focused almost exclusively on the two big fights coming up on Saturday for the rest of the week, but for this morning we'll take one last lingering look at UFC 138, the little UFC that could.

First up, here's UFC 138 Results And Play-By-Play: Leben Vs. Munoz by Luke Thomas. If you missed it here's ESPN Video Highlights From Mark Munoz Vs. Chris Leben.

This photo of Brad Pickett eating Renan Barao's knee is worth a look, there's more at the UFC.com UFC 138 photo gallery: 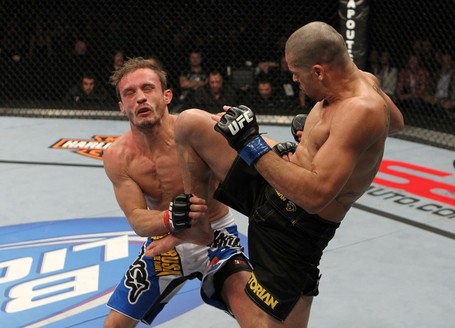 Couple of fun tid bits from the post-fight press conference:

- Dana White Hesitant About Second Chance For Paul Daley: the UFC president leaves just the tiniest smidgen of hope alive that the mercurial Daley will ever be welcomed back in the UFC.

In non-UFC 138 news, there was one other MMA event this weekend, Pro Elite 2, of which the less said the better, but here's the one fun moment: VIDEO: Andrei Arlovski Head Kick KO's Travis Fulton

Now let's get our random on:

An attempted robbery of an L.A. motel was foiled by mixed martial arts experts just arrived from Oregon for the World Jiu-Jitsue No-Gi Championship in Long Beach, authorities said Friday.

The fighters struggled for several minutes to subdue the armed man without hurting him, one of them said Friday evening. Los Angeles police commended Brent Alvarez, 33, and Billy Denney, 28, for their actions.