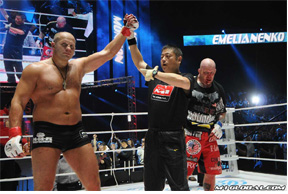 It was easy to expect Fedor Emelianenko's return to his Russian homeland to be a big draw, but few could have anticipated how big.

According to reports from LowKick.com, an estimated 7.5 million viewers tuned-in to see the mixed martial arts legend triumph over former UFC contender Jeff Monson at M-1 Global: Fedor vs. Monson.

However, it should be noted that "7.5 million" is not a live number, but rather, a collective amount. Instead, approximately 4.9 million Russian viewers witnessed the event live on Rossiya-2, a state-operated sports network. Likewise, an immediate replay drew ratings of 1.1 million, while word-of-mouth drew an additional 3.0 million people to the next day's replay.

Still, it's fair to say the event was a coup for M-1 Global. Besides the high television marks, Fedor's return also drew 22,153 spectators to the sold-out Olympic Sports Arena, setting a new European MMA attendance record in the process.

Though one has to wonder how sustainable the breakthrough success can be. Will M-1 be able to garner the same attention once the aging Emelianenko finally decides to hang up his gloves? Only time will tell.